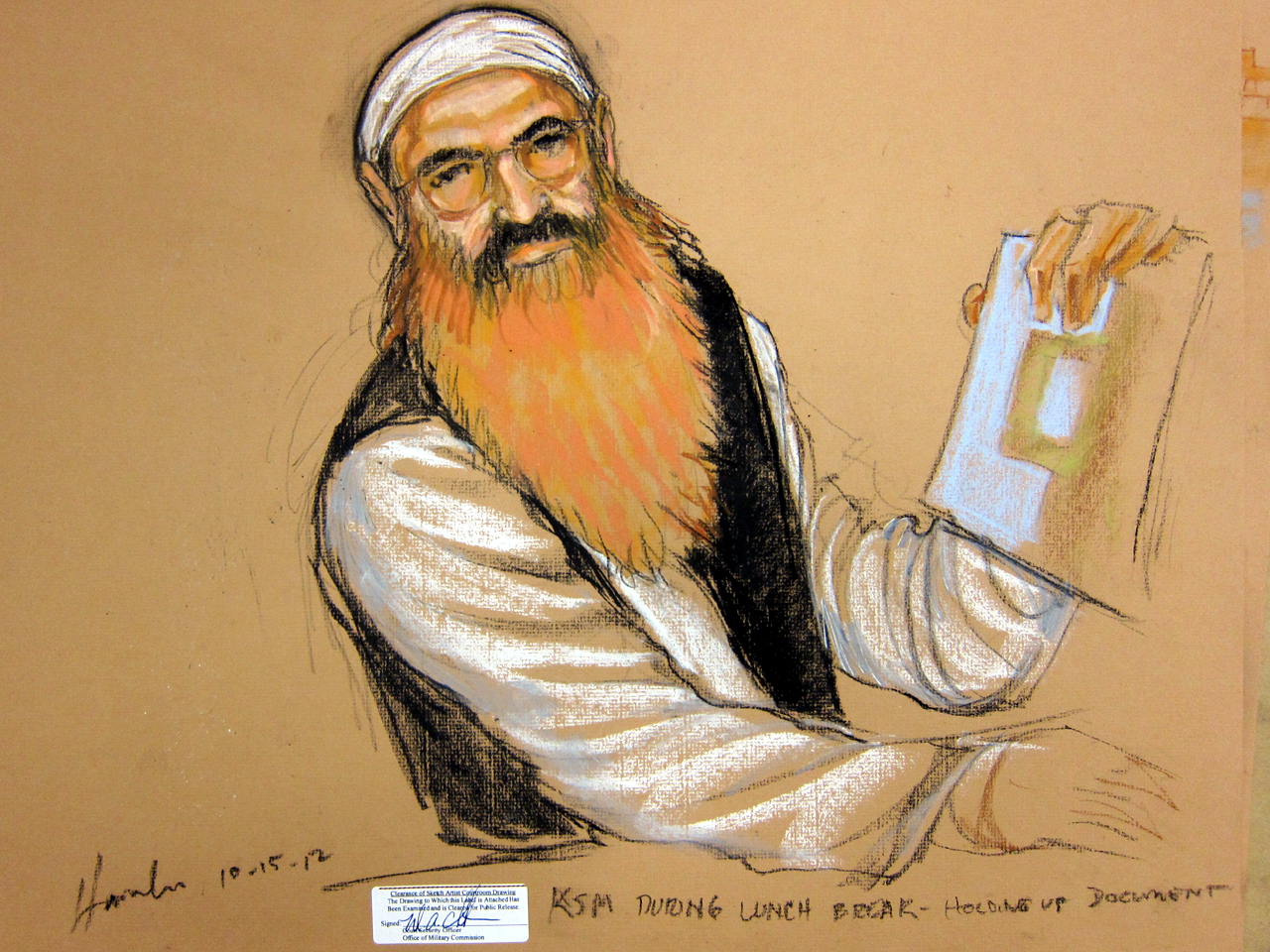 GUANTANAMO BAY NAVAL BASE, Cuba Five Guantanamo prisoners charged in the Sept. 11 attacks returned before a military tribunal Monday, forgoing the protests that turned their last appearance into an unruly 13-hour spectacle.

But the apparent cooperation of Khalid Sheikh Mohammed, who has said he masterminded the worst terror attack on U.S. soil, and four codefendants did little to speed up proceedings that have stuck in a legal and political morass for years.

And Mohammed, dressed a white turban and traditional black vest, made clear he still feels a deep disdain for the proceedings, saying "I don't think there is any justice in this court."

"Our clients may believe that ... I don't want to be subjected to this procedure that transports me here, brings up memories, brings up emotions of things that happened to me," said Jim Harrington, who represents Ramzi Binalshibh, accused of helping to provide support to the hijackers who crashed planes into the World Trade Center, Pentagon and a field in Pennsylvania on Sept. 11, 2001.

The five men sat quietly at the defense tables under the watchful eyes of military guards and several 9/11 family members at the U.S. base in Cuba. Wearing traditional robes, Mohammed, his beard dyed a rust color with henna, serenely read legal papers and listened quietly to the proceedings through headsets. Two others responded politely to the judge when asked.

The Sept. 11 victims' family members attending the hearings in Guantanamo are chosen by lottery. Other families and the public were invited to view the proceedings from closed-circuit video in New York, New Jersey, Massachusetts and Maryland.

At Guantanamo, five blood relatives of victims were allowed to attend the hearing, and each were allowed to bring a guest. At the Fort Hamilton Army base in Brooklyn, N.Y., the only U.S. location to see any victims' family members, just four attended the first day of the hearings, CBS News reports.

Robert Reeg, a retired New York firefighter who was critically injured on 9/11, told reporters it's been "a long ordeal" leading up to the hearings. He said he'd felt "mentally waterboarded" since a 2009 decision to drop earlier military-commission charges. Congress then blocked civilian trials amid opposition to bringing the defendants to U.S. soil.

"It's very hard to go into those courtrooms," Jim Riches, whose firefighter son, Jimmy, died at the World Trade Center, told CBS New York station WCBS-TV. "You sit there and you watch these men smirk and laugh and say that they're proud of what they did and then nothing gets done. There's nothing but motions and movements. The trial hasn't even started yet."

Diane Fairben, mother of Keith Fairben, a 24-year-old paramedic who died from responding to the attacks, said she was happy with the proceedings against the defendants.

"They are getting the best defense; they are getting everything and then some, and things are being done right, and we're happy about that," said Fairben, "because we don't want anything to have to come up on appeal that would let these -- I don't even want to say people -- but lets them slip the noose, so to speak."

Ken Fairben came with a picture of Keith. As he watched the proceedings, he said he looked into each of the men's faces, wondering, "What is he thinking? Why would he want to do this?"

The suspects could be sentenced to death if convicted, but Ken Fairben said he hopes they get life sentences instead.

"If you give them death penalties, that's martyrdom to them," he said. "Why give them something they want?"

All seemed to cooperate with their attorneys in a specially designed high-tech courtroom that allows the government to muffle sounds so spectators behind a glass wall cannot hear classified information.

The orderly scene was in stark contrast to their arraignment in May on charges that include terrorism and murder. At that session, one prisoner was briefly restrained for acting out, Binalshibh launched into an incoherent rant, the men generally ignored the judge and refused to use the court translation system, and two stood up to pray at one point.

Debra Burlingame, whose brother, Charles, was the pilot of American Airlines Flight 77, said it was disturbing to watch the suspects showing disrespect to the court and their own attorneys during the spring hearings.

"One of the defendants made a paper airplane and balanced it on the top of the microphone to mock the victims and their families," Burlingame told WCBS-TV.

She plans to attend the latest round of hearings sometime this week and feels she needs to be there.

"I think it's very important for the world at large to know that the families have not forgotten," Burlingame said.

Harrington told the court that the defendants may want to boycott future court sessions because they don't recognize the U.S. government's authority, or because their transportation from their high-security cells may remind them of the harsh treatment they endured when confined in the CIA's overseas network of secret prisons before they came to Guantanamo in September 2006.

Prosecutors want the men to be required to attend court sessions. Army Col. James Pohl ruled that Mohammed and his codefendants would not be forced to attend hearings that were scheduled to run through the end of this week. He said he may require them to attend future pretrial sessions and said they would have to be present for their trial, likely to begin more than a year from now.

He questioned each defendant individually to make sure they understood the consequences of choosing not to attend. Mohammed responded with a brusque "yes," in Arabic, almost a grunt, before making his one and only statement of the day about the court and justice.

The judge told each man that the trial would go on without them if they were to somehow escape, a notion that prompted a smile of disbelief from Binalshibh. "I'm escaping from custody?" he said in English.

The same question prompted some sarcasm from Ali Abd al-Aziz Ali, a Pakistani citizen accused of funneling money to the hijackers. "I'll make sure to leave some notes," he said in English.

The focus of the week's hearings include broad security rules for the prisoners, including measures to prevent the accused from publicly revealing what happened to them in the CIA prisons.

Prosecutors have asked the judge to approve what is known as a protective order intended to prevent the release of classified information during trial.

Lawyers for the defendants say the rules, as proposed, will hobble their defense. The American Civil Liberties Union, which has filed a separate challenge, says the restrictions are overly broad and would improperly keep the public from hearing the men speak about their captivity.

Protective orders are standard in civilian and military trials to set rules for handling evidence. Military prosecutors argued that the Sept. 11 trial requires additional security because the defendants have personal knowledge of classified information about interrogation techniques and knowledge about which other countries provided assistance in their capture.

The U.S. government has acknowledged that before the defendants were taken to Guantanamo in September 2006 they were subjected to "enhanced interrogation techniques" which in some case included the simulated drowning method known as waterboarding.

Defense attorneys say the treatment will be used in their defense, but the proposed order limits their ability to make that case in court.

The judge's approval of the protective order, which may not happen this week, must occur before the Sept. 11 case can move forward. Defense lawyers cannot begin to review classified evidence against their clients until it is in place.

Mohammed and his four co-defendants are being prosecuted in a special military tribunal for wartime offenses known as a military commission. They were arraigned May 5 on charges that include terrorism, conspiracy and 2,976 counts of murder in violation of the law of war, one count for each known victim of the Sept. 11 attacks at the time the charges were filed.

Mohammed, a Pakistani citizen who grew up in Kuwait and attended college in North Carolina, has told military officials that he planned the Sept. 11 attacks "from A to Z" and was involved in about 30 other terrorist plots. He has said, among other things, that he personally beheaded Wall Street Journal reporter Daniel Pearl. In addition to Ali and Binalshibh, the other defendants are Walid bin Attash; and Mustafa Ahmad al-Hawsawi.