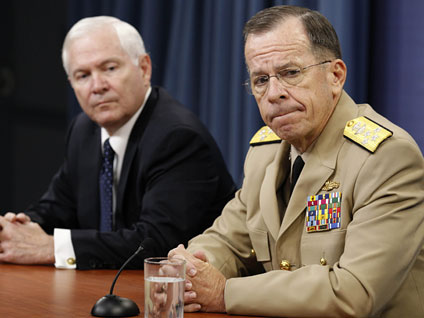 Adm. Mike Mullen, the chairman of the Joint Chiefs of Staff, said today that he was "nearly sick" when he read the Rolling Stone article that led to the resignation of Gen. Stanley McChrystal from his role as top commander in Afghanistan.

Mullen was joined at a press conference with Defense Secretary Robert Gates where both men expressed support for President Obama's decision to accept McChrystal's resignation.

"I cannot excuse his lack of judgment with respect to the Rolling Stone article or a command climate he evidently permitted that was at best disrespectful of civilian authority," Mullen said, after lavishing praise on McChrystal for his service. "We do not have that luxury, those of us in uniform."

"We do not have the right, nor should we ever assume the prerogative to cast doubt upon the ability or mock the motives of our civilian leaders, elected or appointed," he continued. "We are and must remain a neutral instrument of the state, accountable to and respectful of those leaders, no matter which party holds sway or which person holds a given office."

Gates said McChrystal used "poor judgment" that "made his continued service in that post and as a member of the national security team untenable."

"Our singular focus must be on it succeeding in this mission without distraction or division," he said. "...This is the best possible outcome to an awful situation."

Both men echoed Mr. Obama's comments that the strategy in Afghanistan is not changing - though they said General David Petraeus, who is taking over as top commander, could make changes to rules of engagement. Some soldiers have complained that efforts to limit civilian casualties under McChrystal have significantly hampered their ability to fight.

"Any new commander, General Petraeus included, will go in, assess his command, and what it is going to take to achieve the mission, and certainly has the flexibility to make changes that he thinks are necessary," Mullen said. "And so my expectation is, certainly, that's what General Petraeus will do widely and make adjustments."

"Specifically, he's very aware of the issue of civilian casualties," he continued. "He's very aware of the tactical directive. I mean, he was involved in approving it. So now he will be on the ground to see how it's being executed and make decisions or make changes that he would think would be appropriate in his assessment as he takes command, but that does not necessarily portend changes. I just don't know."

The pair also stressed that they are "on board" with the timeline of beginning a gradual process of troop withdrawal in July 2011 - though they stressed that such a drawdown is based on conditions on the ground and subject to revision. Mullen said "we're not even close to understanding" what conditions will be next year and that "it's too early" to make any decisions. Gates noted that there should be some clarity by the time of a strategic review at the end of this year.

"At some point [Petraeus] will make recommendations to the president," Gates said, adding that "at the end of the day the president will decide whether changes are to be made in the strategy."

Addressing the state of the war - by some measures the longest in U.S. history - Gates said "I do not believe we are bogged down."

"I believe we are making some progress. It is slower and harder than we anticipated," he said, adding: "I think we are headed in the right direction."

Mullen said the operation in Marjah - called a "bleeding ulcer" by McChrystal in the Rolling Stone article - made progress.

"It hasn't been unopposed," he said. "We recognize that. But there are things going on in Marjah that weren't going on several months ago, with markets open, schools open, actually local leaders coming out. That doesn't mean that Taliban isn't intimidating. And this is -- this is classic counterinsurgency."

Gates told reporters that McChrystal did not try to explain what he was thinking in participating in the Rolling Stone article and in allowing his staff and himself to say derogatory things about members of the administration to a reporter.

"He just acknowledged that he had made a terrible decision," he said.

"It really is in the category of someone who knows he made a grave mistake," added Mullen. "There's nobody that feels worse and understands the gravity and the responsibility and the accountability better than Stan McChrystal."

The choice of Petreaus, Gates said, reflected not a sense that no one else could do the job but rather that "we not lose time and that we not lose focus during a transition period. "

"There are other generals that we could have chosen, and we talked about other generals," he said. "...[But] it was evident that there was only one general officer who was in the position to move in with hardly a missed beat and take on and continue with this campaign."

Mullen mixed his strong statement that McChrystal needed to go over his "significant error in judgment" with praise for a man with whom he has worked closely.

"He is a friend," he said. "He's an extraordinary officer. He made a severe mistake. And I think the actions that were taken were appropriate."