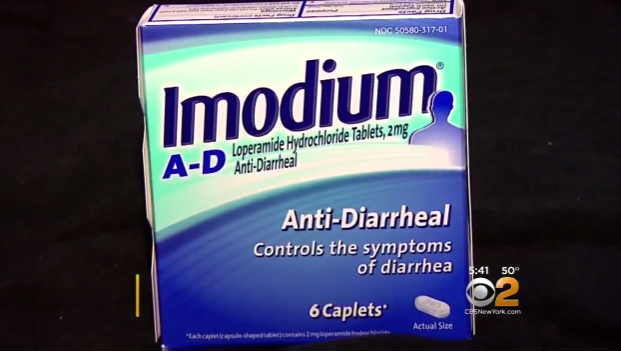 Some opioid addicts are turning to an over-the-counter alternative to get high -- and it's probably not one you'd expect.

According to a report published in the Annals of Emergency Medicine, the anti-diarrhea medication has growing appeal with substance abusers because it's cheap and readily available.

Loperamide, the main ingredient in Imodium A-D, causes intestinal slow-down, which helps stop diarrhea. But in very high doses, it can have other effects -- as well as some serious risks.

"It's an opioid agent and it helps to bind receptors in the brain and cause a similar euphoria or high," said Dr. Scott Krakower, a physician who specializes in addiction disorders at Northwell Health.

Krakower said a person would have to take an enormous dose of anti-diarrhea medication to get high. Addicts are found to be popping anywhere from 50 to 300 pills per day.

According to the study, Imodium A-D, in large doses, works in the body the same way as heroin, morphine, and oxycodone. However, Imodium A-D is a cheaper alternative, as big box stores sell 400 tablets for less than $10.

"Folks that are desperately addicted, folks that are looking to stave off withdrawal symptoms will do whatever it takes sometimes, really extreme things," Dr. Jeffrey Reynolds, of the Family and Children's Association, said. "So in the scheme of things, taking 300 pills is not unheard of."

Excessive doses of Imodium A-D can lead to heart problems, kidney and liver failure, and even death.

In a statement, lead study author William Eggleston, Pharm.D., of the Upstate New York Poison Center, in Syracuse, New York, said that although loperamide is very safe when used properly, doctors need to be more aware of its abuse.

"Our nation's growing population of opioid-addicted patients is seeking alternative drug sources with prescription opioid medication abuse being limited by new legislation and regulations," he said. "Health care providers must be aware of increasing loperamide abuse and its under recognized cardiac toxicity. This is another reminder that all drugs, including those sold without a prescription, can be dangerous when not used as directed."