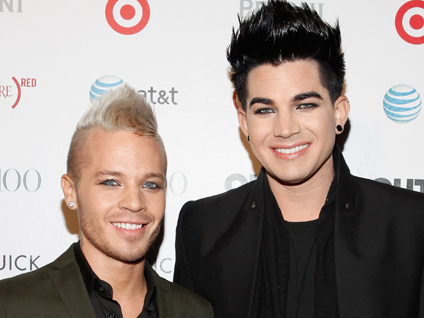 (CBS) Adam Lambert says he and his boyfriend have patched things up after getting into a fight at a gay bar in Helsinki, Finland, early Thursday morning that led to both of them being detained by police.

The "American Idol" runner-up posted a message on Twitter implying that alcohol and jetlag led to the incident.

Reports say that Lambert, 29, and boyfriend, Finnish "Big Brother" winner Sauli Koskinen, 26, got into a fight at DTM bar that became physical. The fight reportedly continued outside the bar after the pair were kicked out.

Lambert was suspected of hitting two people who tried to break up the fight, Detective Superintendent Petri Juvonen told the Associated Press. The Hollywood Reporter, citing local media outlets, reports that Finnish beauty queen Sofia Ruusila claimed she was accidentally struck by Lambert while trying to get between the couple.

Lambert and Koskinen were arrested and held for questioning as local police investigated four possible assault offenses, according to reports. Police said the two men were released after a few hours and that no further action would be taken.