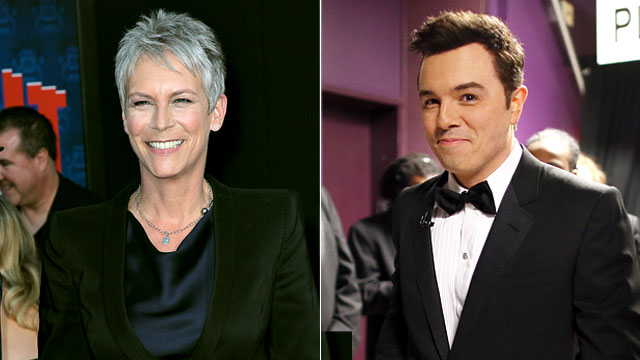 Jamie Lee Curtis was not laughing at Seth MacFarlane's "We Saw Your Boobs" song. In a column for the Huffington Post, the "True Spies" star doesn't hold back on bashing the "Family Guy" creator's hosting stint at the Oscars, calling his display a "cheesy vaudeville show" --and that's the nicest thing she said.

Starting out by saying that she's familiar with MacFarlane's "cruel, cheap jokes," Curtis writes: "As an Academy member, as the child of former Academy members and as a woman, I expected more from the best that the movie business has to offer. The Oscars are about honoring art and artists."

But it was the "boob song" that really got to her. "The 'boob' song, as it will be known in perpetuity, may go down as the highest-rated Oscar number in history, but at what cost? I'm sure public executions would get big ratings too, but is that what the Oscars are truly about? Ratings? When did they turn into a 'roast'? At least at a roast you know what's in store. What if actors and actresses stopped attending the Oscars because it was deemed open session to ridicule and parody them? Would the Academy be so cavalier then?"

The 54-year-old actress adds, "What we will be talking about is Seth's lack of class and a 14-year-old boy's derogatory word for one of the most beautiful, motherly and literally nurturing parts of the female form."

RELATED: Top 5 Oscars moments you may have missed

Curtis wasn't the only one offended by this song. Jane Fonda, 75, also wrote on her blog about the Oscars: "What I really didn't like was the song and dance number about seeing actress' boobs. I agree with someone who said, 'If they want to stoop to that, why not list all the penises we've seen?'"

What do you think? Is Curtis right, or is she taking the joke too seriously?