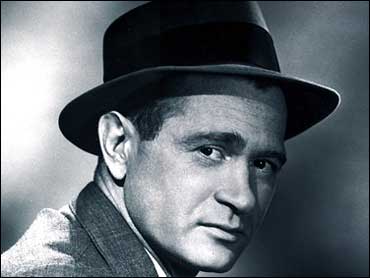 Darren McGavin was painting a movie set in 1945 when he learned of an opening for a small role in the show, climbed off his ladder, and returned through Columbia's front gates to land the part.

The husky, tough-talking performer went on to become one of the busiest actors in television and film, starring in five TV series, including ?Mike Hammer,? and endearing holiday audiences with his role as the grouchy dad in the 1983 comedy classic ?A Christmas Story.?

McGavin, 83, died Saturday of natural causes at a Los Angeles-area hospital with his family at his side, said his son Bogart McGavin.

McGavin also had leading roles in TV's ?Riverboat? and cult favorite ?Kolchak: The Night Stalker.? Among his memorable portrayals was Gen. George Patton in the 1979 TV biography ?Ike.?

Despite his busy career in television, McGavin was awarded only one Emmy: in 1990 for an appearance as Candice Bergen's opinionated father in an episode of ?Murphy Brown.?

He lacked the prominence in films he enjoyed in television, but he registered strongly in featured roles such as the young artist in Venice in ?Summertime,? David Lean's 1955 film with Katharine Hepburn and Rosanno Brazzi; Frank Sinatra's crafty drug supplier in ?The Man with the Golden Arm? (1955); Jerry Lewis's parole officer in ?The Delicate Delinquent? (1957); and the gambler in 1984's ?The Natural.? He also starred alongside Don Knotts, who died Friday night, in the 1976 family comedy ?No Deposit, No Return.?

Throughout his television career, McGavin gained a reputation as a curmudgeon willing to bad-mouth his series and combat studio bosses.

McGavin starred in the private eye series ?Mike Hammer? in the 1950s. In 1968 he told a reporter: ?Hammer was a dummy. I made 72 of those shows, and I thought it was a comedy. In fact, I played it camp. He was the kind of guy who would've waved the flag for George Wallace.?

Born in Spokane, Wash., McGavin was sketchy in interviews about his childhood. He told TV Guide in 1973 that he was a constant runaway at 10 and 11, and as a teen lived in warehouses in Tacoma, Wash., and dodged the police and welfare workers. His parents disappeared, he said.

He spent a year at College of the Pacific in Stockton, Calif., taking part in dramatics, then landed in Los Angeles. He washed dishes and was hired to paint sets at Columbia studio. He was working on ?A Song to Remember? when an agent told him of an opening for a small role.

?I climbed off a painter's ladder and washed up at a nearby gas station,? McGavin said. ?I returned through Columbia's front gate with the agent.? The director, Charles Vidor, hired him. No one recognized him but the paint foreman, who said, ?You're fired.?

McGavin studied at the Neighborhood Playhouse and the Actors Studio and began working in live TV drama and on Broadway. He appeared with Charlton Heston in ?Macbeth? on TV and played Happy in ?Death of a Salesman? in New York and on the road.

He is survived by his four children, York, Megan, Bridget and Bogart, from a previous marriage to Melanie York McGavin, Bogart McGavin said. McGavin was separated from his second wife, Kathy Brown, he said. Services were set for March 5 at Hollywood Forever Cemetery.