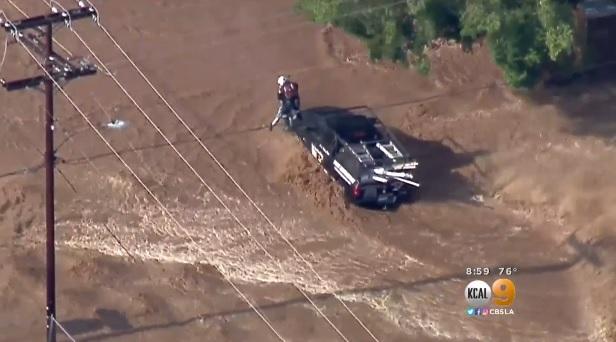 The worst of the flooding happened between 5 p.m. and 7 p.m. in Acton, CBS Los Angeles reports.

Helicopter views showed streams of muddy brown water gushing around ranches, homes and cars, although no evacuations were called.

One man driving a pickup truck got stuck in the raging waters and had to be hoisted to safety by a rescue helicopter.

A Metrolink train was also stranded during rush hour after the ground gave way near the tracks. The train eventually was able to move on at about 7:45 p.m., authorities said.

Acton is in the Antelope Valley off the 14 Freeway and has many natural riverbeds that fill up and take over the streets during heavy rains.

An inch and a half of rain caused the flash flooding.

Moist, monsoonal air is causing storms, and forecasters say they could dump up to an inch of rain per hour. The National Weather Service issued flood watches for the mountains and the Antelope Valley through the evening.