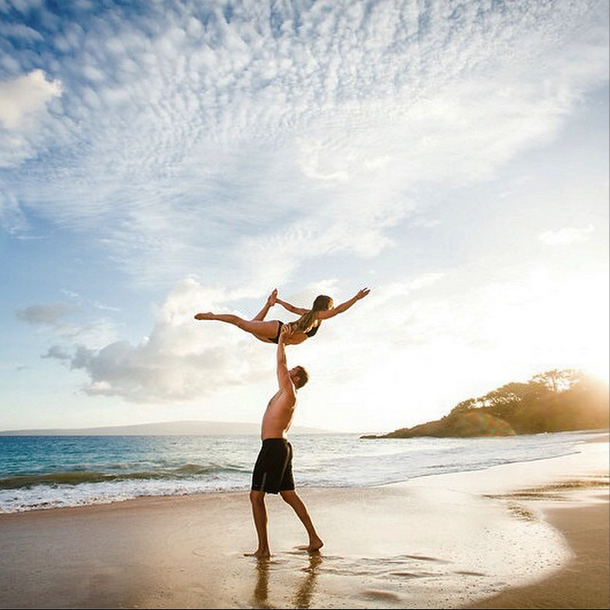 How would you handle a disagreement with your partner if you were physically depending on him to keep you from falling on your face? Just a hunch, but you might work a little harder to communicate clearly with one another in that instance.

AcroYoga, a form of partner yoga, can serve to build a foundation of trust and understanding among couples, say AcroYoga devotees Lewis Howes and Jen Esquer.

According to AcroYoga Montreal, this style of yoga officially began in Canada in 1999. Californians Jenny Sauer-Klein and Jason Nemer began their own AcroYoga movement, incorporating acrobatics, yoga, and Thai massage in 2003. Now, AcroYogis are cropping up all over the United States. Howes and Esquer are now regulars at a Sunday afternoon outdoor AcroYoga hot spot on the beach in Santa Monica, California.

It seems the power of AcroYoga is responsible for bringing these two together. The couple first met after Howes checked out Esquer's Instagram and spotted her doing handstands with one of his friends. He was instantly smitten by the gymnast turned Pilates teacher.

Shortly after the two met and began dating, they took on the physical challenge of learning AcroYoga together. They have accumulated about eight months of practice, and they credit their passion for this exercise with helping to deepen their trust in one another.

"It's been cool because we really have to focus on trusting each other. It's me being able to trust her that she's going to be able to do what she needs to do while I'm holding her up, and she's got to trust me fully because some guys have dropped her on her head before," Howes explains.

Esquer echoes Howes's sentiment, "It's about letting go and trusting. It's great learning together because I really get to know how he feels and he knows how I feel as we're learning this skill. We've been refining it and getting better."

Open communication and trust form the basis of a healthy relationship, and coincidentally, they are some of the most vital components of AcroYoga. The majority of the moves involve a person on the ground acting as a base that holds up the flyer. In some positions that Esquer demonstrates, she's balancing precariously upside down, completely relying on Howes to keep her safe from falling.

This is where strong verbal and non-verbal communication skills come into play. And the ability of each person to take and give direction can prevent serious harm.

Howes knows it's all about being receptive to taking direction. "She tells me what she needs and I'll just adjust to what she needs. If I can tell she's nervous I will try to reassure her and tell her she's doing great."

When things get frustrating and the couple catch themselves falling into patterns of perfectionism, they take a step back, because in the end, it's all about having fun.

"When she's not having fun, I make sure to relax ground myself and allow her to take her space," says Howes.

Though Esquer got into AcroYoga through gymnastics, she insists you don't have to be a gymnast to reap the benefits of the practice.

Esquer explains that workshops are a great way for a lot of people to get started. Look around your community and find a workshop near you.

"You can learn some basic moves on the ground in just a couple hours a week," says Howes.