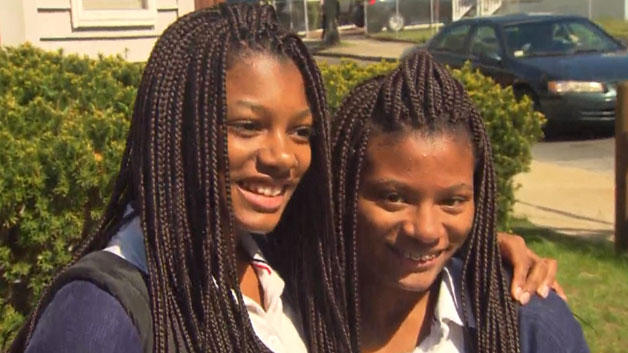 MALDEN, Mass. -- The American Civil Liberties Union of Massachusetts has filed a complaint against a charter school for disciplining and suspending black and biracial students because their hairstyles violate the school's dress policy.

The ACLU filed the complaint Monday with the state Department of Elementary and Secondary Education against what it says is a discriminatory policy at Malden's Mystic Valley Regional Charter School.

Two students -- twin 15-year-old sisters Deanna and Mya Scott, who are African American -- were punished for wearing braids with hair extensions. The Scott sisters have been banned from participating in track, banished from the Latin Club and are not allowed to attend any school events due to the hair code violations.

According to some parents, Caucasian students have not been disciplined for coloring their hair, which also is banned under the dress code, which prohibits hair extensions, but not braids.

"I was really excited to be celebrating my culture because I have white parents and it's very important to participate in the culture," Mya told CBS Boston.

But Deanna says she thinks the policy is racist.

"What they're saying is we can't wear extensions, and the people who wear extensions are black people," she explained. "They wear them as braids to protect their hair and they're not allowing us to do that."

The 15-year-olds are two of five siblings adopted by Colleen and Aaron Cook.

"I'm angry, I feel like my children are beautiful, they're black, they should be proud of themselves," Colleen said. "I'm very proud of them."

"The policy specifically discriminates against African-American children as it relates to hair extensions," Aaron added. "You typically do not see Caucasian children with hair extensions. The fact that it's in the handbook does not make it a non-discriminatory policy."

School administrators have said the ban on hair extensions is designed to "foster a culture that emphasizes education rather than style, fashion or materialism."

"The specific prohibition of hair extensions, which are expensive and could serve as a differentiating factor between students from dissimilar socioeconomic backgrounds, is consistent with our desire to create an educational environment, one that celebrates all that students have in common and minimizes material differences and distractions," School Interim Director Alexander Dan said in a written statement.

Matthew Cregor, project director at the Lawyers' Committee for Civil Rights and Economic Justice, said in a letter to the school that the policy may violate federal anti-discrimination law, citing guidelines from the U.S. departments of Justice and Education.

Cregor also went on to suggest that the school's hiring policies are discriminatory, noting that only one of the school's 156 teachers are black.

Dan still says the school "would like to focus on what unites our students and reduce visible gaps between those of different means."