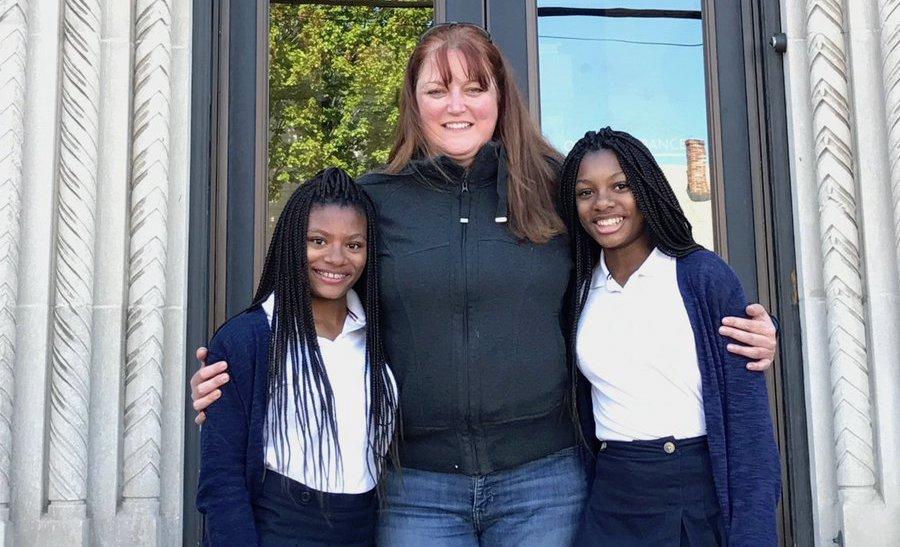 Deanna and Mia Cook, 15, who are black, were given detentions because the Mystic Valley Regional Charter School dress code says braid extensions aren't allowed. Deanna says she thinks the hair policy is racist.

"What they're saying is we can't wear extensions, and the people who wear extensions are black people. They wear them as braids to protect their hair and they're not allowing us to do that," she said.

Colleen Cook, the twins' mother, says the school is discriminating against her girls by not allowing hair extensions. She told the Boston Globe that braided hair gives her daughters pride. "They want to partake in their culture," she told the newspaper.

But the school's interim director, Alexander Dan, says that their policy is to minimize fashion expenses for families whose children attend the school.

"The specific prohibition of hair extensions, which are expensive and could serve as a differentiating factor between students from dissimilar socioeconomic backgrounds, is consistent with our desire to create an educational environment, one that celebrates all that students have in common and minimizes material differences and distractions," Dan said.

Robert Treston, regional head of the Anti-Defamation League, says he's concerned about the policy. "There are a lot of unanswered questions and we're very concerned that the school policy, the way it's apparently being implemented, may have a discriminatory impact," he said.

Treston says his organization wanted to first try to learn the facts. "So it's important now for these unanswered questions to be investigated so people have a sense that the school policies are being applied in an equitable way," he said.

Matthew Cregor, project director at the Lawyers' Committee for Civil Rights and Economic Justice, said in a letter to the school that the policy may violate federal anti-discrimination law, citing guidelines from the U.S. departments of Justice and Education.

"This civil rights guidance is directly relevant to your school's discriminatory treatment of the Cook twins for three reasons: First, the parents in today's article expressed concern that white students who dye their hair are not facing the same consequences as black students with braids or extensions. This is especially troubling as your policy does not even discuss suspending students for hair/makeup violations, something that the article suggests has happened," Cregor wrote in the letter.

"Second, unlike the jewelry and nail polish prohibited in your code, braids and extensions are worn primarily by African-American and Afro-Caribbean students, raising concerns of discriminatory treatment. Third, it is hard to understand how braiding, a deep-rooted cultural practice of people of African descent, can be put in the same category as the 'drastic and unnatural hair colors' your code prohibits as 'distracting,'" Cregor said.

Dan maintains that the school "would like to focus on what unites our students and reduce visible gaps between those of different means."