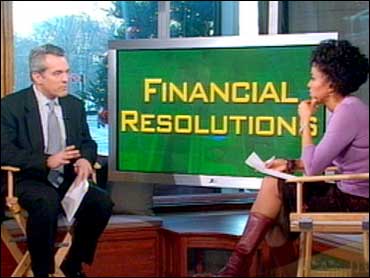 So on Wednesday's The Early Show, personal financial adviser Ray Martin offers hints on how to follow through on your financial resolutions.

Forget dieting. Most Americans are more concerned about the health of their bank accounts, according to a survey conducted by Intuit, Inc, makers of Quicken personal finance computer software. Sixty-one percent of folks polled listed "getting my personal finances in order" as one of their top three goals for the New Year. The only resolution that was more popular was "spending more time with family and loved ones."

Another poll, conducted by the Marist College Institute for Public Opinion, also found financial concerns among respondents' top resolutions for 2004.

Financial resolutions are usually popular goals, but Martin says they are of a higher priority now than in the past because of the lingering effects of the economic downturn and stock market slump.

While Martin supports these goals, he recommends adding: Get a Will and Obtain adequate insurance coverage.

About 70 percent of Americans don't have a will. According to Martin, any family with kids needs one because that's where parents have the opportunity to name guardians. Also, anyone with assets that are solely in their name should have a will to assign those assets in the event of their death.

In Martin's experience, most people are under-insured and paying too much for the insurance they do have. He urges everyone to closely examine the policies.

Here are Martin's ideas for setting and achieving those important financial resolutions.

"Set out to first accomplish the goals that will provide the most financial benefit and free up resources that can then be used to accomplish your other goals," Martin says. "For example, use some income to pay down credit card debt. When the payments are gone, use the income to build up an emergency fund or save for a downpayment on a house or a car."

If you have two goals that seem to be in direct competition with each other, such as saving more for retirement and saving for a home, Martin says you need to figure out which goals are immediate and which are long-term. In this instance, you probably want the home as soon as possible, while you may have years to retirement. Plus, once you have the home, its value will figure into your retirement plans. So, it makes sense to dedicate a larger part of your savings to the house downpayment.

"Any goal that's not written down isn't worth the paper it's written on," Martin says. "Set your goals, keep them realistic, then reduce them to a written summary of: what you want to do; why you want to do it; when you will do it; and how. The key to nailing this is to keep it short and specific." Here is an example: