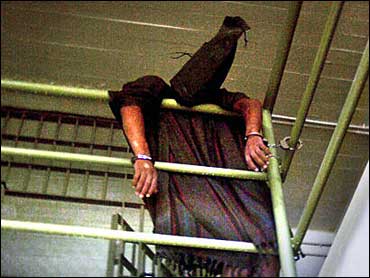 Prisoners in three of the most infamous photographs of abuse to come out of the Abu Ghraib prison in Iraq were not being softened up for interrogation by intelligence officers, but instead were being posed as punishment for criminal acts or the amusement of their jailers, The Washington Post reports in its Saturday ediitons.

"Several of the photographs taken by military police on the cellblock have become iconic," the Post says, "among them the naked human pyramid, the hooded man standing on a box hooked up to wires, and the three naked prisoners handcuffed together on the prison floor. The documents show that MPs staged the photographs as a form of entertainment or to discipline the prisoners for acts ranging from rioting to an alleged rape of a teenage boy in the prison."

The New York Times said Saturday that the use of dogs to intimidate prisoners during interrogation at Abu Ghraib "was approved by military intelligence officers at the prison, and was one of several aggressive tactics they adopted even without approval from senior military commanders, according to interviews gathered by Army investigators."

The role of intelligence officers in the abuse scandal "is still under investigation," the Times points out, "and the newly disclosed documents provide further details of their involvement in abuses that so far have resulted in formal charges against the prison guards, but not the interrogators."

Arab leaders meeting in Tunis, Tunisia Saturday for their annual summit were united in outrage over the prisoner abuse scandal in U.S.-occupied Iraq, according to a draft resolution.

It includes a strong condemnation of the abuse by U.S. soldiers as "crimes and inhuman and immoral acts," saying it constitutes a "flagrant violation of human rights and international conventions. " The draft resolution demanded trials and punishment for those responsible.

Back in Iraq, accounts emerging Saturday say U.S. soldiers forced female detainees at Abu Ghraib to serve male prisoners meals after the men had been stripped bare and beaten.

One man, who identified himself only as Ghazwan, was among 454 detainees released Friday from the American-run prison at the center of an abuse scandal. He was held with his father and brother for nine months and said he spent six in "heavy quarantine."

"They were psychologically torturing us, especially in the heavy quarantines. They were abusing us inside these quarantines by beating us and forcing us to take off all our clothes. They were forcing detained women to distribute food to us while we were naked," said Ghazwan.

Public nakedness, especially in the presence of women, is considered especially degrading in conservative Arab societies.

Following the revelations of abuse, U.S. officials have said they plan to cut the facility's population in half. A U.S. official said there are now roughly 3,700 remaining detainees there.

Investigation into the abuse will "go to the top," the U.S. military has said.

Other prisoners released Friday said their treatment improved after pictures of naked prisoners being sexually humiliated came to light.

Since January, more than 4,500 detainees have been released from Abu Ghraib. Another 394 prisoners are scheduled to be set free May 28, U.S. Brig. Gen. Mark Kimmitt said.

On Friday, a convoy of at least six buses, accompanied by U.S. troops in armored vehicles and jeeps, took the latest group of released detainees from the prison on the western outskirts of Baghdad to Tikrit and Baqouba, north of Baghdad. Some were also returned to Ramadi and Baghdad.

In one Baghdad neighborhood, there was jubilant celebration in traditional Iraqi style.

Women threw chocolates and clapped their hands to live drum and horn music played on downtown streets. Men slaughtered a sheep, fired rifles into the air and wept as they embraced their returning family members.

The release came two days after Sivits, the first American accused in the scandal, was sentenced to a year in prison for sexually humiliating detainees and taking a photo of prisoners stacked naked in a human pyramid.

Sivits was sentenced on Wednesday to one year in prison, reduction in rank and a bad conduct discharge - the maximum penalty - after pleading guilty to maltreating detainees in the first court-martial stemming from the Abu Ghraib case. Three others were arraigned and deferred pleading. They will appear before a military judge on June 21.

In Baqouba, two busloads of detainees were handed over to local Iraqi police and were released shortly later. The freed detainees kissed the ground and kneeled to pray after walking out of the police compound in the city, 50 miles northeast of Baghdad.

Abdul Salam Hussain Jassim, 18, said U.S. authorities detained him for three months. He said he was rounded up with others after an explosion in a Baqouba street.

"Don't even talk about torture. They destroyed me," Jassim said of his detention. He said a family of five brothers and sisters was detained in the same block and that one of the men was beaten so badly he died two days later.

The other prisoner, Ghazwan, told the same story.

"Three brothers and sisters were detained together and brought to the prison, the two sisters are still in the quarantine and one of the three brothers was killed while the troops were torturing him," he said. "They took him to the quarantine and brought him dying to his brother's (Ali Alizzi) cell and threatened him that if he will not talk or confess, he would face the same fate."

The prisoner died in his brother's arms, he said.

Another former prisoner released on Friday, Maher Saeed, said he was tied to a car and dragged through the sand for several hundred yards.

Officials said Friday that the Pentagon has begun criminal investigations of at least 37 deaths involving detainees held by U.S. forces in Iraq and Afghanistan. There are 33 cases involved, the officials said, eight more than the military reported two weeks ago.

The officials said they could not immediately say for sure the exact number of deaths involved.

Eight pending cases have been classified as homicides involving suspected assaults of detainees before or during interrogation sessions, a senior military official said, speaking on condition of anonymity.

The video, obtained by The Washington Post, shows an American soldier striking a prisoner in the face. The soldier then drags another prisoner by his handcuffs across the floor then returns to begin organizing naked prisoners into the pyramid that was one of the original images to come to light in the prison scandal.

The abuse began last October and continued through December. CBS News National Security Correspondent David Martin reports much of the mayhem occurred on a single night when inmates who had rioted in another part of the prison were brought into the cellblock known as the hard site.

Martin reports the video footage shows Spc. Charles Graner Jr. -- the ringleader of the abuse -- as he cocks his fist to punch a shackled Iraqi prisoner

As bad as the pictures are, sworn statements the prisoners gave to investigators describe worse, Martin reports.

According to those statements, American soldiers urinated on prisoners, sodomized one with a chemical light stick and took pictures as a translator raped a 15-year-old boy.

Although the guards claim they were just following orders to soften up prisoners for interrogation by military intelligence, the investigation has found that many of the abused prisoners were simply criminals who had no information of any value, Martin reports.

Their statements catalogue punishments that Martin says can only be described as sadistic. One statement reads: "He cuffed my hands ... behind my back to the ... window to the point my feet were off the ground and I was hanging there for about five hours. He started beating me with the chair until the chair was broken. After that they started choking me … they took a little break and then they started kicking me very hard with their feet until I passed out."