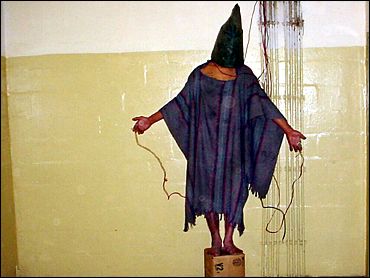 An Army report on abuse at Abu Ghraib prison blames about two-dozen people but lays no direct blame on top military or civilian leaders, according to published reports and a senior defense official.

The official, who spoke Wednesday on condition of anonymity, provided no details of the report. Bryan Whitman, a Pentagon spokesman, would say only that the report was nearing completion.

The newspaper reported the inquiry found no evidence of direct blame above the rank of the colonel who commanded the military intelligence unit at the prison. Senior officers in Baghdad and in Washington were not found to have played a role in ordering or allowing the abuse.

"There was no direct policy directives out of the Pentagon that caused this," said an unidentified official quoted by the Times. The official said that Lt. Gen. Ricardo S. Sanchez, the former top commander in Iraq, did not issue orders to abuse detainees.

However, The Times reported in Thursday's editions that the inquiry found that senior American commanders created conditions that allowed abuses to occur at the prison because they failed to provide leadership and sufficient resources. The report will say that inadequate oversight and discipline created an environment in which changing guidelines for supervising and questioning 45,000 detainees throughout Iraq could be ignored.

Another official said the report found there were two kinds of abuse: violent or sexual abuse that was intentional and abuse that was a result of misinterpretation of changing procedures.

Seven military police soldiers have been charged, and one pleaded guilty in exchange for his testimony against the others.

Photos of the prisoner abuse, which included beatings and sexual humiliation, created a worldwide scandal when they were published in April.
The allegations at Abu Ghraib triggered investigations of the

From the outset of the scandal, a key question has been to what extent top military and civilian officials were responsible for the abuse at Abu Ghraib and elsewhere.

Several top commanders had roles in setting the legal and procedural atmosphere at Abu Ghraib.

Brig. Gen. Janis Karpinski, who ran the prison during the period when some abuse occurred, was singled out in Maj. Gen. Antonio Taguba's investigation of the mistreatment of prisoners there. Taguba recommended that Karpinski be punished for lapses including "failing to ensure that MP Soldiers in the 800th MP Brigade knew, understood, and adhered to the protections afforded to detainees in the Geneva Convention Relative to the Treatment of Prisoners of War."

The Washington Post has reported that Sanchez approved the use of dogs, sleep deprivation, temperature extremes and other tactics with no approval from outside the Abu Ghraib prison. When Central Command officials objected, Sanchez issued new rules eliminating some of the methods and requiring that he approve the tactics.

Maj. Gen. Geoffrey Miller, who was in charge of the Guantanamo Bay detention camp, studied Iraq prisons last year and called for military police guards to help "set the conditions" for interrogations. That recommendation was criticized by Taguba. Some interrogation methods used at Abu Ghraib appear to have been imported from Guantanamo. Miller now oversees U.S. prisons in Iraq.

The furor over the prison abuse has also exposed a debate at the highest levels of civilian government over how to balance the fight against terrorism with civil liberties concerns. The arguments apparently pitted military and State Department lawyers against Pentagon leaders and Justice Department recommendations.

In many instances, according to documents that have surfaced since the scandal broke, the officials who advocated tougher measures won.

In a February 2002 memo, President Bush ordered that all prisoners in the war on terrorism be treated humanely and, "to the extent appropriate and consistent with military necessity," in line with the "principles" of the Geneva Conventions. But at the same time he reserved the right to suspend the conventions "in this or future conflicts."

The Bush administration has long distinguished between al Qaeda and Taliban prisoners, to whom it does not extend Geneva protections, and captured Iraqi fighters, who are covered by the conventions.

But some of the legal reasoning in Washington challenged the application of any of the rules of war to the fight against terrorism. In a memo written in August 2002, the Justice Department appeared to justify the use of torture in the war on terror and argued that the president's wartime powers superseded anti-torture laws and treaties. The Justice Department has disavowed that memo.

Other documents have emerged showing that Defense Secretary Donald Rumsfeld authorized guards to strip detainees and threaten them with dogs. Some techniques Rumsfeld approved in December 2002, such as the use of stress positions and 20-hour interrogations triggered objections from interrogators and military lawyers, reports CBS News Correspondent David Martin.

Five months later Rumsfeld issued a scaled back list — still in effect this year — which includes withholding hot meals, isolation, and one called fear up harsh — shouting threats and throwing objects across the room.

It has also emerged that, at the request of then-CIA Director George Tenet, Rumsfeld directed Sanchez to imprison an admitted terrorist without reporting him to the International Red Cross. Both assigning a prisoner number and notifying the Red Cross are required under the Geneva Conventions and other humanitarian laws.