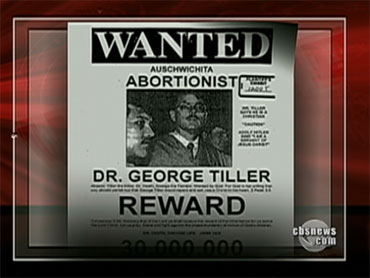 Reverend Phillip "Flip" Benham, 62, director of the anti-abortion group Operation Save America, was found guilty of violating a state law that prohibits residential picketing for stalking a doctor who performs abortions. He was sentenced to 24 months probation and plans to appeal.

They look like wanted posters from the Wild West. But they're not photos of criminals, CBS News correspondent Michelle Miller reports -- they depict doctors in North Carolina who perform abortions. They asked us to block their faces.

"It doesn't say 'Wanted Dead or Alive' but the implications are clearly there," said a doctor, who, fearing for his life, asked to remain anonymous.

Those responsible for the fliers, Operation Save America, repeatedly protest abortions at women's health clinics in the Charlotte area. Claiming the doctors "harm women and kill babies," they list specific addresses and urge people to contact doctors there. One poster even cites a home address.

"These 'Wanted' posters are a call for my murder," a doctor said.

In the 1990s similar fliers were distributed in other cities. Then came the murders. Pensacola, Fla., doctor David Gunn and Dr. George Patterson of Alabama were shot and killed in 1993. Dr. John Britton was murdered a year later in Florida. All were targets on Wanted posters.

Dr. George Tiller survived an assassination attempt in Wichita in 1993. He was killed in his church last year.

Flip Benham founded Operation Save America and says the new posters are not threatening.

"If you read the writing in there, it's wanted by Christ," Benham said. "We want them to meet Jesus."

Federal law makes it a crime to use force, or even the threat of force, to prevent people from accessing clinics. In 2002, a U.S. Appeals Court ruled that Wanted posters similar to these were a violation of that law.

"The decision back in 2002 only affects that region and that area," said CBS News legal correspondent Jan Crawford. "It doesn't affect the poster in Charlotte that are at issue now."

Women's rights groups have called for the Justice Department to investigate the posters fearing history could repeat itself.