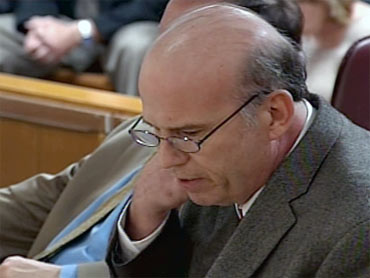 Defiant in court, a man who murdered one of the few U.S. doctors who performed late-term abortions used his sentencing hearing to do what the judge wouldn't let him do during his trial — justify his crime by describing abortion in gritty detail.

"I stopped him so he could not dismember another innocent baby," Roeder said. "Wichita is a far safer place for unborn babies without George Tiller."

Roeder, 52, also was sentenced to an additional year in prison on each of two counts of aggravated assault for threatening two church ushers as he fled. With time off for good behavior, Roeder won't be eligible for parole for 51 years and eight months.

An attorney for Tiller, speaking in court as a friend of the slain doctor, said the toughest sentence would discourage other anti-abortion zealots from attacking doctors. Tiller's widow, Jeanne, cried as the sentence for murder was announced.

"We only can hope that this sentence will serve as a deterrent to those who have conspired and continue to conspire to murder abortion providers," the Tiller family said in a statement. "Certainly everything possible should be done by the prison system to insure that this man does not continue to foment hatred and violence from his prison cell."

District Judge Warren Wilbert could have made Roeder eligible for parole on the murder charge after 25 years. But he said there was evidence Roeder stalked Tiller and added that killing him in a church made the crime heinous because a house of worship is meant to be "a place of peace and tranquility."

Roeder argued he had chosen to obey "God's law" to save babies.

"I did kill him. It was not a murder," Roeder said. "If you were to obey the higher power of God himself, you would acquit me."

Roeder also took the opportunity to describe abortion procedures in detail, which he had been forbidden from doing during his trial. Most abortions are legal in Kansas, and prosecutors were careful not turn the trial into a referendum on the issue.

Roeder accused Wilbert of "duplicity" and said his trial was a miscarriage of justice because he wasn't allowed to present testimony then about the evils of abortion. He also said God's judgment against the U.S. will "sweep over this land like a prairie wind."

"He will avenge every drop of innocent blood," Roeder said.

Forty minutes into his remarks, Wilbert stopped Roeder as he was about to publicly attack District Attorney Nola Foulston.

"It is not a forum for you to get on a soap box for you to give your entire political beliefs," Wilbert told Roeder.

As he was being led away in handcuffs after the sentencing, Roeder shouted, "Blood of babies on your hands."

Roeder's ex-wife said the outbursts were characteristic of the man she knew. Lindsey Roeder said she and their son, Nicholas, were relieved by the sentence.

"I think it will be a lot easier to put it behind us than it will be for the Tiller family," she said. "Their pain will continue long after ours has subsided."

Tight security guarded the hearing. A half-dozen sheriff's deputies gathered around Roeder when he began interrupting the judge and law enforcement officers earlier had explosive-detecting dogs sniff reporters' equipment. Sheriff's deputies joined agents from the FBI and the Bureau of Alcohol, Tobacco, Firearms and Explosives on duty outside the courtroom.

During the hearing, four of Roeder's friends described him as a friendly, compassionate man who became angry at the state's refusal to stop Tiller's practice. He was motivated by a strong believe that abortion is wrong, not a desire to become famous or lead a movement, they said.

"Scott longs to be a law-abiding citizen," said Dave Leach, an anti-abortion activist from Des Moines, Iowa. "He hates anarchy. He wants to do what he can to make America better."

"The impact of his death on women throughout the world is like an earthquake," Thompson said. "They ask, where can I go? What will I do?' I have to say, 'I'm sorry, I can't tell you.' That's the impact of this crime."