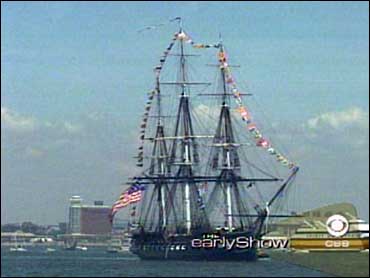 Known as "Old Ironsides," the USS Constitution is the oldest commissioned warship afloat in the world, and according to Cmdr. Lewin Wright, it was the "biggest show in town on the water."

On the 4th of July, the commanding officer took the ship for what is called a Turnaround Cruise. "We have an armada of shipping following us around when we do this," Wright tells The Early Show co-anchor Harry Smith Monday morning.

Accompanying the ship's active crew on the cruise were the winners of a national lottery held during the year via the ship's official Web site. Twelve immigrants also took their oath of citizenship onboard during a special naturalization ceremony.

The ship and guests traveled approximately 3 miles into Boston Harbor to Castle Island, a historic fort once commanded by Paul Revere. At noon, it fired a 21-gun salute at noon, and then made its way back to its homeport, Charlestown Navy Yard in Charlestown, Mass.

"Taking her around the harbor is quite an experience," says Wright.

Although the ship was first put to sea in 1798, Cmdr. Wright says it is still an active U.S. Navy warship. "It's a great honor to be the captain of this ship," he says.

Smith got the chance to watch a cannon blast as part of the traditional raising of the flags. He also received a tour from Cmdr. Wright.

The ship is nicknamed "Old Ironsides" because it was said that cannonballs bounced off her oak sides in battle during the War of 1812.

Here are some quick facts about the USS Constitution: