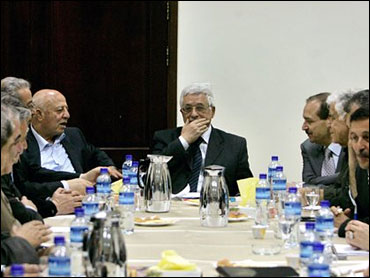 The PLO Executive Committee accepted the document, authorizing Abbas to call a referendum on it, said Yasser Abed Rabbo, a senior Palestinian official.

Abbas' deadline expired Tuesday, but he gave the militant Islamic group more time due to pressure from other officials.

Meanwhile, Israeli Prime Minister Ehud Olmert will meet King Abdullah II in Jordan, his second trip to an Arab country since taking office in May, and his second meeting with an Arab head of state this week. Olmert held talks with Egyptian President Hosni Mubarak in Sharm el-Sheik, Egypt, on Sunday.

The leaders are discussing how to revive the peace process, now that the Islamic militant group Hamas controls the Palestinian Authority, reports . Jordan and Egypt are urging Olmert to bypass Hamas, and negotiate with moderate Palestinian president Mahmoud Abbas.

On Monday, Abbas ruled out any changes in the 18-point document negotiated by Palestinian prisoners in an Israeli lockup. It accepts a Palestinian state in the West Bank, Gaza Strip and east Jerusalem, implying recognition of Israel next to it.

The plan was formulated by politically powerful Hamas and Fatah prisoners. But the Islamic group's exiled leaders, who make final decisions on policy, have refused to accept the document.

Hamas spokesman Sami Abu Zuhri insisted that the talks must continue, saying parts of the document are positive, but Hamas has problems with other parts.

Hamas lawmaker Khalil al-Hiyah said that despite Abbas' statement, there was still time to resume the talks instead of calling a referendum.

A vote could deeply embarrass Hamas. Polls show the prisoners' document would win broad approval. Hamas won January elections in a landslide against Abbas' Fatah, but government inefficiency and corruption were the main issues, not policy toward Israel.

Hamas opposes the existence of a Jewish state in an Islamic Middle East and has rebuffed Western demands to recognize Israel, accept previous peace accords and renounce violence. The West cut off aid to the Hamas-led government, leading to a financial crisis.

Abbas has endorsed the prisoners' plan as a way to end the crushing Western sanctions and allow him to resume peace talks with Israel.

Israeli Foreign Minister Tzipi Livni said Monday that the document is an internal Palestinian issue, and Israel is not commenting on it.

Many Palestinians are uneasy about the referendum, though polls show the document would be approved easily. In Gaza, Mohammed Abu Seido, 30, a coffee shop cashier, said he would vote for the document, but he worried that Hamas would react with violence if it is approved. "Hamas is already failing," he said.

The Palestinians have never held a referendum before, and officials said the vote would not be binding. But passing the referendum could give Abbas an important boost in his standoff with Hamas.

"It would bolster his legitimacy and give him power to go ahead with negotiations with Israel," said Azam al-Ahmad, a top Fatah official. Al-Ahmad also said Abbas, who wields considerable powers, would consider calling elections for president and parliament if Hamas did not abide by the results of a referendum.

The dispute comes during an increasingly violent power struggle between Abbas and the Hamas-led government. Five people were wounded in two clashes between Hamas and Fatah forces Monday in the southern Gaza city of Khan Younis.

Palestinian officials say Hamas has smuggled hundreds of thousands of dollars into the Gaza Strip in recent weeks, to pay essential employees and finance its new militia, reports . The money was smuggled in from Egypt, after U.S. and European sanctions left the government flat broke. But the money is far short of the $150 million a month Hamas needs for the salaries of 165,000 government employees, most of whom have not been paid for three months.

Abdullah, a key Arab ally for the U.S and a staunch proponent of a Palestinian-Israeli peace settlement, conveyed the same message to President Bush in talks with him last week in Washington.

The Jordanian monarch wants Israel and the Palestinians to renew their commitment to the road map — an internationally backed peace plan that envisions an end to Palestinian-Israeli violence and the creation of an independent Palestinian state.

Judeh said the king will repeat that call during his meeting with Olmert.

Abdullah will also urge the Israeli prime minister to "refrain from (undertaking) unilateral actions that could prejudice the outcome of final status negotiations" between Israel and Palestinians, Judeh added referring to Olmert's vision of a two-state solution.

"His Majesty will also reaffirm the necessity of easing the suffering of the Palestinian people and that they should not be victim of any unilateral Israeli action," the Jordanian spokesman said.

Under Olmert's plan, Israel would unilaterally draw the final borders with the Palestinians.

Jordan, like Egypt and other moderate Arab nations, is worried that the plan could undermine Palestinian statehood and upset Palestinians living here.

Roughly half of Jordan's 5.5 million population is made up of Palestinians. Most of them fled or were driven out of their homes or are descended from those who were made homeless during the 1948 and 1967 wars with Israel.

Olmert has said he is ready to meet Palestinian President Mahmoud Abbas to explore whether stalled efforts to end more than 5 years of fighting could be resumed.