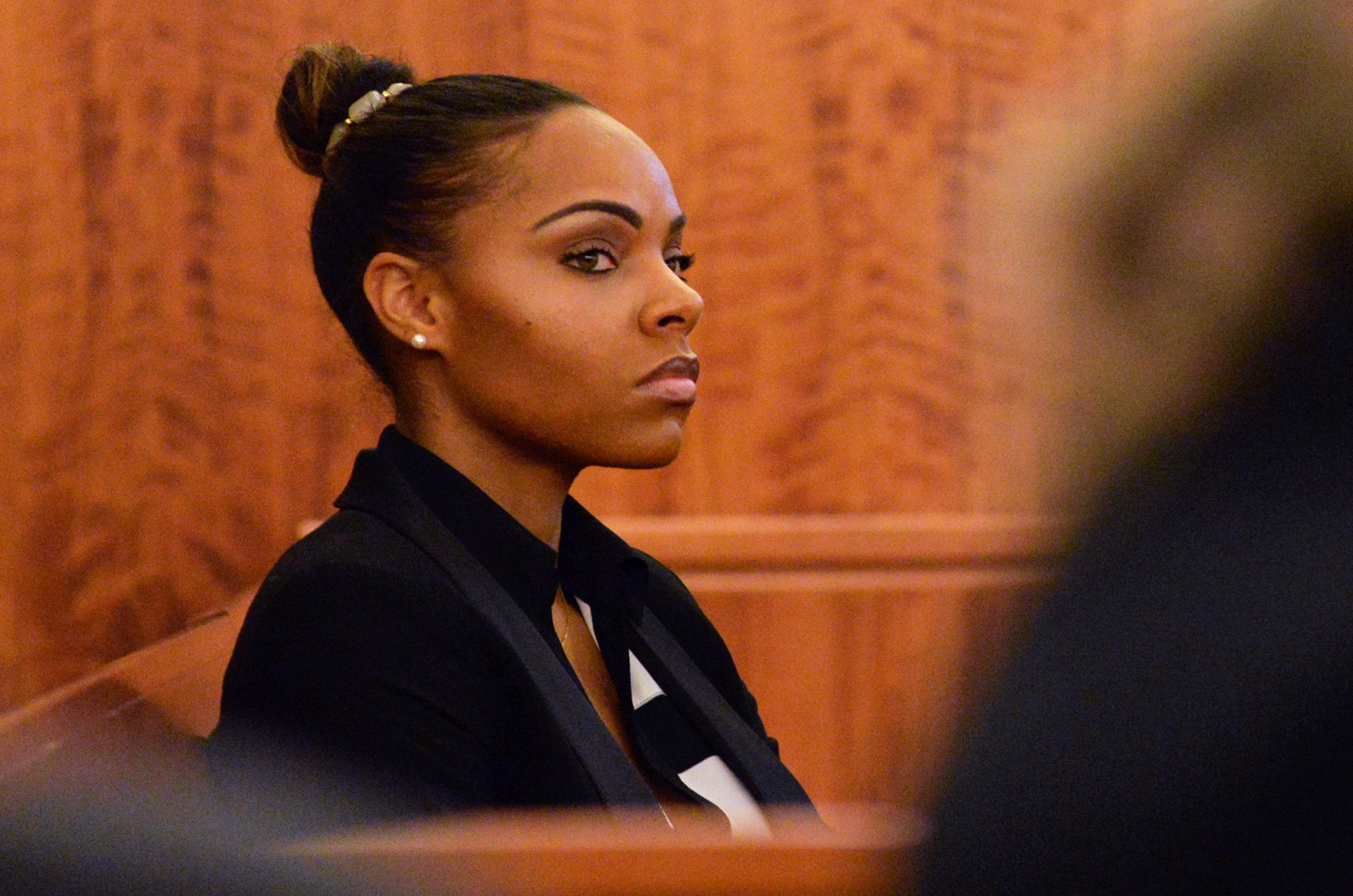 FALL RIVER, Mass. - The fiancee of former New England Patriots player Aaron Hernandez testified in his murder trial Monday that she removed a box from their basement at his request the day after Odin Lloyd was killed.

Shayanna Jenkins testified for a second day after being called to the stand by prosecutors. Jenkins, 25, is Hernandez's high school sweetheart and the mother of his 2-year-old daughter. She was compelled to testify under a grant of immunity.

Hernandez, 25, is charged with killing Lloyd on June 17, 2013. Lloyd, 27, was dating Jenkins' younger sister. He was found shot to death in an industrial park less than a mile from the home Hernandez and Jenkins shared.

Jenkins, wearing her large diamond engagement ring, said on questioning from Assistant District Attorney William McCauley that Hernandez called her the day after Lloyd was killed and told her it was important to toss the box.

"He told me to go downstairs in our storage room and remove a box from our home," Jenkins said. "I believe he said it was important."

Downstairs, she found a cardboard box, open on top, that had smaller boxes and cardboard inside, obscuring what was underneath, she said. Jenkins said she didn't look inside the box or ask Hernandez what was inside. Instead, she said, she put it inside a trash bag and covered it with baby clothing, then borrowed her sister's car and drove around the area.

She said she threw it in a trash bin but could not remember where.

"I don't know. I found a random dumpster," she said.

Prosecutors have said the box may have held evidence or the murder weapon, which was never found, but on questioning from Hernandez's lawyer, Jenkins said for the first time that the box smelled "skunky" and she thought it contained marijuana.

"Did you have a thought about what was in there?" defense lawyer Charles Rankin asked.

"I did," she replied, adding, "That it was marijuana."

Jenkins did not look at Hernandez during testimony or when she got off the stand for a break.

The testimony contradicts in part what she told a grand jury that investigated the killing, saying then that no one told her to remove the box and that it wasn't important to her to do it. She said then that she did not remember where she threw it away. She was charged with perjury for that testimony and has pleaded not guilty.

When asked how she could not remember where she disposed of the box, Jenkins said she was nervous at the time.

"I really had to play a neutral role as far as trying to comfort my sister. Everyone's emotions were kind of on me," Jenkins said.

Her sister, Shaneah Jenkins, who was sitting next to Lloyd's mother, left the courtroom soon after Shayanna's remarks. A few minutes later, Shaneah returned, and some jurors glanced toward her as Shayanna Jenkins continued to testify.

She also testified about what happened when Hernandez came back home early the morning of June 18, after he had gone to the North Attleborough police station at the request of investigators.

"I believe I asked him at that point if he did, did it, and he said no," she said.

Hernandez watched Jenkins intently for much of her testimony, but she didn't look at him. She broke down and began to cry during questioning from Hernandez's lawyer as she talked about catching him cheating and about making a decision to work things out with him and to "compromise" on his behavior.

"That included infidelity," she said.

The couple exchanged a brief glance before the lunch break as she was leaving the stand and he was being led through a side door to a secure area in the courthouse.