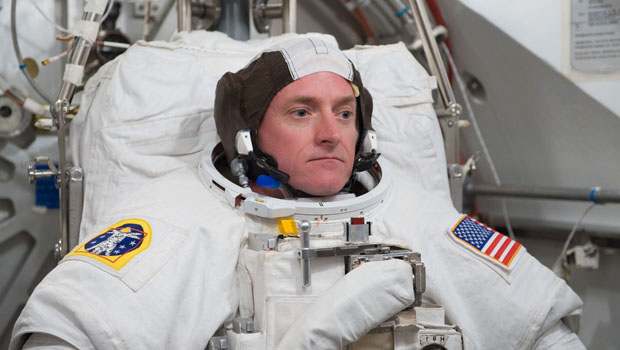 An American "rocket man" is scheduled to take off into orbit this coming Friday, with the hope of setting an endurance record at a time when the U.S. space program might seem to be in eclipse. Our Cover Story is reported by David Pogue of Yahoo Tech:

"I believe that this nation should commit itself to achieving the goal, before this decade is out, of landing a man on the moon and returning him safely to the Earth."

It was a time when dreams about spaceflight came true. It was a giant leap for mankind. But since then, it seems we've taken a step back -- and in 2011, when the space shuttles stopped flying, a lot of people kind of forgot about NASA.

But NASA's still here. And five days from now, it will launch one of its most ambitious missions to date: sending 51-year-old astronaut Scott Kelly to the International Space Station for 12 months. That's twice as long as his last trip to space in 2010, and a new record for an American astronaut.

"Last time I felt like I was kind of taking a long business trip," Kelly told Pogue. "This time it's more like I feel like I'm just moving and I'm not coming back."


Without the space shuttle, Kelly has only one way to get into space: aboard a Russian Soyuz spacecraft. He'll take off from the world's oldest space launch facility, the Baikonur Cosmodrome, in southern Kazakhstan.

He'll be traveling with Russian cosmonauts Mikhail Kornienko and Gennady Padalka. And in case you're wondering, Kelly says political tensions between the countries are left on Earth as the men embark on a cramped, six-hour journey to the space station.

Kelly showed Pogue a replica of the Soyuz spacecraft at NASA's Johnson Space Center in Houston. "It's not very big," Kelly said.

"I gotta ask you: it doesn't look like cutting-edge technology, it looks like '60s technology," said Pogue.

"Some of it is," said Kelly. "The good news is, it works, you know, most of the time. They've had a couple accidents. But, you know, so did we on the space shuttle. Risky. But you know, flying in space is a risky thing."

If Scott Kelly looks familiar, well, it might be because he has a famous twin brother -- Mark Kelly, a retired astronaut himself, and husband of former Congresswoman Gabby Giffords.

"I'd be lying if I didn't tell you that I wish I was blasting off in a rocket in a couple of months," said Mark.

He won't be on the space station, but Mark is part of the mission, as an identical control subject on the ground. By comparing the twins' biology over the year, scientists hope to learn more about what happens to you after a long time in space, like bone loss and muscle loss -- important groundwork for an eventual mission to Mars.

But physical changes are only part of the story. There's the mental challenge of living in a six-room box in space for a year.

So, Pogue asked, "What would happen if you started getting signs that he's starting to crack?"

"Well, we don't expect to see signs that he's starting to crack!" laughed NASA psychologist Al Holland, whose team will be in constant contact with Kelly. "First of all, we've done a selection -- due diligence. The people that are coming in, we already have a certain amount of confidence that in a prior life they have done things that are stressful, and they've endured other long separations effectively."

Scott Kelly certainly has endured stress in space before -- for example, during his six-month stay on the International Space Station: "It was a Saturday, January 8th, 2011," he recalled. "And we got a call for me, that the chief of the astronaut office wants to talk to you on a private space-to-ground channel in five minutes. And she said, 'Yeah, I don't know how to tell you this, so I'm just gonna tell you. Your sister-in-law was shot in the head at a public event in Tucson, Arizona, and we don't have much other information.'

Eventually, Gabby Giffords recovered, and Scott got to see her two months later at home.

But very soon, home will once again be the space station.

At the Johnson Space Center, NASA has built a mockup of the International Space Station, which they use for training.

"Actually in space, it's quite comfortable," Kelly said of the "lavish" bedroom.

"Very carefully," laughed Kelly. "It uses air suction. It's got this funnel. And you turn it on, and vacuum comes up and you do your thing."

And talk about advanced technology: When you're finished, a special distiller recycles your urine back into drinking water.

There are no laundry facilities, however, nor showers. "So we throw away the clothes and we take a little sponge bath," said Kelly.

Here's the kind of space clothing he won't be throwing away -- space suits for space walks, which always stay connected to the ISS with a long dafety tether.

"So you don't jet around like George Clooney [in 'Gravity']?" asked Pogue.

"I don't think we do anything like George Clooney did in that movie, including the sense of humor," laughed Kelly.

"So you are always gripping something?"

"Yeah. If you've fallen off the space station, that's a bad day."

The original space food -- "cubes and tubes" -- was like baby food that astronauts would squeeze into their mouths. Space station cuisine today looks more like a TV dinner. According to food manager Vickie Kloeris, astronauts eat entrees like spaghetti and meat sauce, sweet and sour chicken, and even the occasional Cajun specialty, like crawfish etouffee.

Kloeris' team has developed a menu of 200 space foods. Before each launch, the astronauts get to choose their favorites. "It's not gourmet, but considering everything, it's pretty good," she said.

From his food to his fitness to his health, every detail of Kelly's life on space is managed by his team on Earth. But the most important person on the ground might be his long-time girlfriend, Amiko Kauderer, who works in NASA's public affairs office. These two are about to give new meaning to the term "long-distance relationship."

"Most of my concerns with this flight, being gone for a year, is the stuff that can happen to people on Earth while I'm gone," he said.

Kelly, who has two daughters from a previous marriage, will be able to call his family by phone whenever he wants. They can have video chats with him once a week.

"I can't imagine that it would be easy for anyone," said Pogue.

"It's not easy at all. But I think the mindset is, we kind of really appreciate challenge and things that are hard, because we often know at the end of it, that you can kind of go, 'Yeah, we DID that,' you know?"

"And the homecoming's really good after a year!" said Kelly.

A year in space, to prepare for a mission to Mars. For NASA, those are giant leaps, indeed.

Mikhail Baryshnikov on "The Orchard" and Putin's war