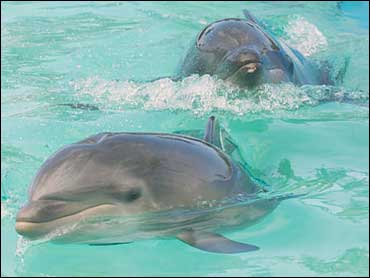 A rare whale-dolphin mix has given birth to a playful female calf, said officials at a Hawaii water life park.

The calf was born on Dec. 23 to Kekaimalu, a mix of a false killer whale and an Atlantic bottlenose dolphin. Officials at Sea Life Park Hawaii said they waited to announce the birth on Thursday because of recent changes in ownership and operations at the park.

The young as-yet unnamed wholphin is one-fourth false killer whale and three-fourths Atlantic bottlenose dolphin. Her slick skin is an even blend of a dolphin's light gray and the black coloring of a false killer whale.

The calf still depends fully on her mother's milk, but sometimes snatches frozen capelin from the hands of trainers, then toys with the sardine-like fish.

She is jumbo-sized compared to purebred dolphins, and is already the size of a one-year-old bottlenose.

"Mother and calf are doing very well," said Dr. Renato Lenzi, general manager of Sea Life Park by Dolphin Discovery. "We are monitoring them very closely to ensure the best care for them."

Although false killer whales and Atlantic bottlenose dolphins are different species, they are classified within the same family by scientists.

"They are not that far apart in terms of taxonomy," said Louis Herman, a leading expert in the study of marine mammals.

There have been reports of wholphins in the wild, he said.

Kekaimalu, whose name means "from the peaceful ocean," was born 19 years ago after a surprise coupling between a 14-foot, 2,000-pound false killer whale and a 6-foot, 400-pound dolphin. The animals were the leads in the park's popular tourist water show, featured in the Adam Sandler movie "50 First Dates."

Kekaimalu has given birth to two other calves. One lived for nine years and the other, born when Kekaimalu was very young, died a few days after birth.

"He seems to be totally oblivious to this happening," Lenzi said.

False killer whales do not closely resemble killer whales. They grow to 20 feet, weigh up to two tons and have a tapering, rounded snout that overhangs their toothed jaw.

Atlantic bottlenose dolphins reach a maximum size of 12 feet and can weigh up to 700 pounds.

Sea Life Park officials said they hope to decide on a name for the baby wholphin soon and move her to a large display tank in a few months.