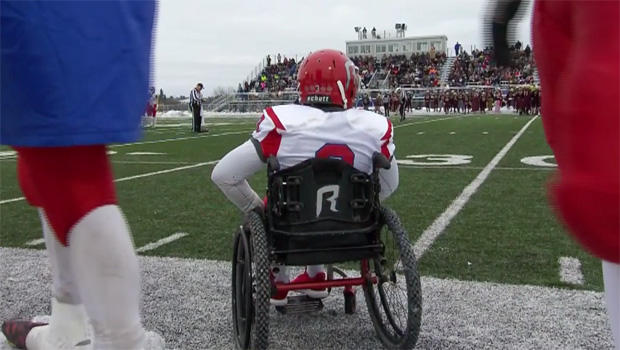 On this Super Bowl Sunday, Mark Strassmann has found a high school player who's an MVP in anybody's book:

They're the Moose Lake Rebels, a high school football powerhouse in northern Minnesota where the frozen fields can feel as hard as any tackle.

For Danny Lilya, a 16-year-old junior, this is bliss.

"I'd be in the stands wearing my Rebels jersey, and had my hair painted red and blue. And I'd watch and I'd think to myself, 'I wanna be out there.'"

But it's complicated: Danny came into the world with a separated spine. "I was born with a broken back," he told Strassmann. "So, I'm paralyzed from the waist down."

Dan and Sheryl Lilya, Danny's parents, knew from Day One he wouldn't walk. "It became a realization: He's going to be in a wheelchair for the rest of his life," said Dan. "We're gonna raise this child, and whatever he's gonna be, he's gonna be."

By age two, Danny had spent a year in a full body cast.  He also has had nine surgeries for his mangled spine and club feet.

But this football fanatic was born a Rebel.

"He always just wanted to do everything all the other kids did," said Sheryl.

Before Danny's sophomore year, a teammate had an idea to get him on the field: Danny could get out of his wheelchair, kneel down, and be the player who holds the ball for the team's kicker during extra points and field goals.

"I always stress everybody finding their role on the team. And Danny is just a perfect example of, you have a kid in a wheelchair, and even he has a role on this team."

When asked to describe what it was like to be on the field, Danny replied, "It was just amazing."

"The snap couldn't have been more perfect. It was right in my hands. Got it down, he kicked. I watched the ball. It went right through the uprights."

"Must have been a dream come true?" asked Strassmann.

"Yeah, definitely. I've always been dreaming of being a Rebel football player since I was in kindergarten. And finally having that dream come true was amazing."

His father said, "Everybody coming over to give him high-fives, the crowd was cheering. Yeah, there wasn't a prouder moment in my life."

This past season the high school junior held the ball for more than 20 successful extra points. In those moments, kneeling and facing away from charging defenders, he's the most vulnerable player on the field.

Strassmann asked his parents, "Are you worried when he's out there?"

No, said Sheryl: "If someone tackled him, that'd probably be the best day of his life!" she laughed.

"What could be the worst thing that could happen as far as an injury goes?" added Dan. "He'd get paralyzed?"

In December the Minnesota Vikings invited Danny to a practice of their field goal unit.

"And then they say, are you ready to hold some kicks? And I'm like, yeah, sure. And on the last kick, their long snapper said to me, "This one is to win the game and go to the Super Bowl.'"

What Danny slowly realized is that the Vikings were giving him two tickets to tonight's Super Bowl in Minneapolis. "No way! That's true? Oh my God. Holy ---- ! Wow! Thank you, guys!"

The kid born with a broken back will never walk … but he keeps kicking down doors.