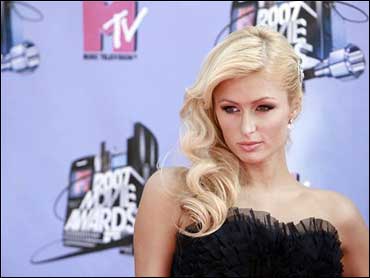 Paris Hilton visited with her parents Kathy and Rick on Sunday, the New York Daily News reports, and gave her father a Father's Day card with his picture on it.

The Hilton arrived at the Century Regional Detention Facility in a silver Chevy sedan about 7:15 p.m. and left about an hour later, according to the report.

Asked by reporters about Father's Day, the patriarch said, "It's not ideally my best."

The newspaper reports that Paris is doing better but she's often cold in her cell, her mother said. "I thought her arm was broken," said Kathy, making a motion like she was shivering.

Meanwhile, one celeb is hoping that Hilton's talk of redemption is for real. Ellen DeGeneres said she hopes that when Hilton gets out of jail, she'll be a changed person.

Hilton has said she wants to stop acting dumb because "that act is no longer cute." DeGeneres says "if that really is an act, if she really was playing dumb, then what does that say about our society that we're celebrating someone who was successful because they're not smart?"

DeGeneres says she'd have Hilton as a guest on her daytime talk show and tell her the same thing. She hopes that Hilton "means what she says" and that "she is reading good books" and "changes her life a little because she needed to."