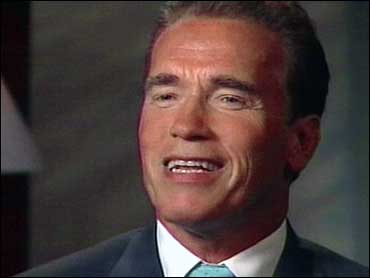 This column was written by Jonathan Wilcox.

Sacramento is a place of surreal scenes: A major sports arena in the middle of nowhere, a midtown-street corner with opposing coffee shops, two separate freeways both known as "The 80."

Still, none compare for weirdness to the recent spectacle of Gov. Arnold Schwarzenegger entering into a week-long discussion with his Democrat tormentors to negotiate the cancellation of a statewide special election he alone made possible.

That the eleventh-hour talks ultimately failed was no shock. That the governor even attempted this one-way appearance of bipartisanship left many puzzled. It may also upend any chance he has to change California's chaotic government and dysfunctional politics.

Remember Arnold Schwarzenegger? The movie star who swept into Sacramento with more money and momentum than had ever been seen before? The irresistible political force whose approval ratings tickled stratospheric heights and whose candor and independence seemed just what voters were looking for?

So much for the early box-office reviews. Today, Arnold is portrayed as a spent political force accused of shilling for campaign dollars, shady deal-making with supermarket tabloids, and singling out innocent teachers and nurses for a manufactured "phenomenon of anger."

Okay, that's just the Los Angeles Times, but you get the point.

Along with the negative mainstream media blitz, Schwarzenegger has been shelled by millions of dollars of television ads accusing him of wanting to steal from schools, deny benefits to the families of fallen firefighters, and cancel the health care of house-bound invalids.

Predictably, his poll ratings have tumbled, and with them much of the non-stick coating that allowed him to achieve political success through unconventional means.

During his first year in office, sporadic accusations of hardheartedness tended to slide right off of Arnold. Today, he's more like the Velcro Man, unable to avoid contact with practically every controversy attached to
California's government.

What changed? After a year mostly concentrated on policy moves he could present in an upbeat fashion and compel Democrats to join or at least let pass, Schwarzenegger proposed the most sweeping and significant reform of California's government since the Progressive Era of nearly 100 years ago:
Because of this, he may yet be able to explain the strangest reality of all: Several additional policies pushed by Sacramento's Democrats -- tripling of the car tax, in-state college tuition for non-citizens, driver's licenses for undocumented aliens, government-run health care -- are wildly unpopular with a large majority of Californians, including Democrats and Republicans.

This brings us to the comic charade of Sacramento's symphony of voices demanding the governor reach out to and bargain with those who have driven his approval ratings down to Gray Davis-like levels.

Schwarzenegger complied, offering hopeful pleas that he sought a bipartisan solution above all others and lamenting, "I'm very sad to say we tried very hard but we just ran out of time."

How Democrats kept a straight face through it all is a testament to both their acting skills and to the emerging consensus that the action hero doesn't have the mettle to endure a tough and even nasty campaign.

Make no mistake: Democrats know that a degree of their political power is derived from a fraudulent gerrymander and maintained by fleecing public-employee union dues. They understand there is nothing good for them in a deal that changes any of this.

Still, the Democrats' ferocious television ads and tough talk only obscure a relatively weak hand and an audacious bluff in what are surely no-limit stakes at the final table. To the tune of perhaps $100 million, they are all in.

Is Arnold prepared to call?

Jonathan Wilcox is an adjunct professor at USC's Annenberg School for Communication and a former speechwriter for California Governor Pete Wilson.

By Jonathan Wilcox.
Reprinted with permission from National Review Online