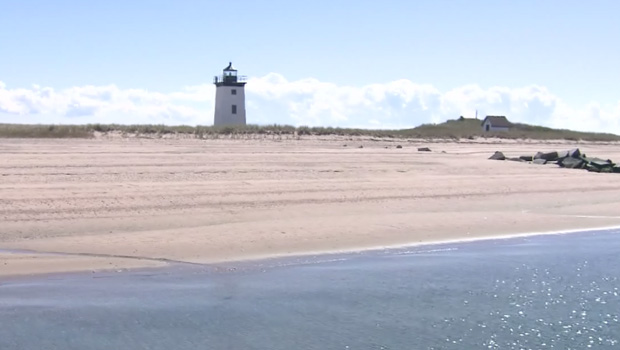 "P-town" is the nickname for Provincetown, the vacation spot that attracts thousands of visitors each summer. Mo Rocca takes us on a guided tour:

Henry David Thoreau described Cape Cod as "the bared and bended arm of Massachusetts." If you go to the very, very end of that arm, you'll arrive at Provincetown.

Just three miles long and two streets wide, the town is surrounded on three sides by water, hence that glorious light. "The light is like the light out at sea," said writer Michael Cunningham. "It's not land light."

When asked to describe the light, businessman Dave Roberts said, "You can't. It changes by the day. By the hour. By the minute."

In the words of Norman Mailer, Provincetown is "a gaudy run with Mediterranean splashes of color, crowded steep-pitched roofs, fishing piers, and fishing boats."

You may have heard of "P-town," as it's known, as a popular summer getaway, especially for gay tourists. It's also one of America's oldest arts colonies -- a longtime sanctuary for novelists, playwrights, painters and Pilgrims.

Yes, Pilgrims! In 1620, the Pilgrims landed first in Provincetown before heading on to Plymouth, and Provincetown has the monument to prove it.

"The monument's kind of like the beacon of Provincetown," said Rob Costa, who operates Art's Dune Tours, founded by his father in 1946.

"Only dune tours and shack dwellers are allowed into the trails here," he said.

Out here, a Who's-Who of American artists have found inspiration and solitude in the rustic dune shacks perched precariously on these wild and shifting sands.

Some of the great artists and writers who have spent time in Provincetown include Jack Kerouac , Sinclair Lewis, Jackson Pollock, E.E. Cummings, and two of the greatest American playwrights of the 20th century: Eugene O'Neill and Tennessee Williams.

"They say he wrote some of the last finishing touches of 'A Streetcar Named Desire' there," said Costa. "And they claim Marlon Brando did, in fact, walk across the dunes to audition for his role in that production in that shack."

"It was a good role -- it was worth hiking over the dunes for," said Rocca. "And out here, If you scream, 'Stella!' no one can hear you!"

A century ago, Provincetown's beaches were crowded with aspiring artists. "If you were in the front row of your painting class, one of your jobs was to keep mosquitoes off the model," said Chris McCarthy, executive director of the Provincetown Art Association and Museum, which recently celebrated its 100th birthday.

There was so much art being produced, at one time it was used as currency. "The town doctor amassed an incredible art collection because he swapped artwork for services," said McCarthy.

"Wow," said Rocca, "now that is an insurance plan that that doctor was happy about," when a Robert Motherwell or Milton Avery artwork is your copay.

Artists like Philip Malicoat painted year-round, bringing even the dead of winter to light.

"You can feel the wind, the bluster, the cold through the palette, and the way that he created the composition in this painting, which is beautiful," said McCarthy describing a Malicoat.

"The message is, don't be scared of Cape Cod winter," said Rocca.

"Some of the finest pictures have come out of Cape Cod winters, as far as I'm concerned," McCarthy said. "If you are bold enough to be here in the wintertime, you get to experience this firsthand."

"Come February, we could be walking right here and not see a soul," Cunningham said.

Thirty years ago, Cunningham survived his first Provincetown winter, barely. "I went a little crazy," he said. "I mean, I got cabin fever, almost required hospitalization."

Still, Cunningham's book about Provincetown is nothing short of a love letter:

"This is another of those strangely potent places. Everyone I know who has spent any time on the dune agrees that there's, well, something there, though outwardly it is neither more nor less than an enormous arc of sand cutting across the sky."
From "Land's End: A Walk in Provincetown" by Michael Cunningham

"It's an eccentric's sanctuary," Cunningham said. "It's one of the very few places I know of that actually prefers peculiarity. They would actually rather there be something a little off about you."

Dave Roberts may not be eccentric, but when he's in Provincetown, he's all about the creative. "I love it when I do this, 'cause everybody's an artist," he said. "You know, everybody has a little art in 'em."

"If someone who had never been to Provincetown asked you to describe it, what would you say?" asked Rocca.

"I'm gonna quote my beautiful granddaughter. She had pigtails, and she said, 'Provincetown's like this: If I had six pigtails, and every one was a different color, no one would even look at me!' Isn't that beautiful?"

"I should stop disturbing you," said Rocca, "because the light's changed 14 times since we began chatting."


He asked Cunningham, "Can you draw a line between the Pilgrims, Eugene O'Neill, Robert Motherwell, and you?"

"You know, it's slightly mysterious, Provincetown's allure. And I'm perfectly content with it as a mystery. It's remote. It's a little bit wild. There's something about it that's hard to put your finger on."

Rocca said, "I have a feeling there are gonna be a lot of people watching at home saying, 'That's it -- on Monday, I'm quitting my job, I'm moving to Provincetown, I'm gonna become the artist I always wanted to be!"

"A lot of people have done that, believe me!" said Costa.