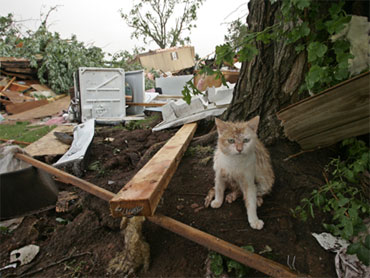 
With several polls putting the race for the White House in a dead heat, the heat is on the vice presidential contenders as they ready to face-off Tuesday in Cleveland. And so there is something rare about this vice presidential debate: it matters.

Vice President Cheney is charged with stopping the downward momentum the Republican ticket has undergone since the presidential debate last week. Senator John Edwards needs to continue the Democratic surge.

Beginning at 9 p.m. EDT at Case Western Reserve University in Cleveland, the two men are expected to pull few punches as they debate both foreign and domestic issues. And by any measure, the 90-minute debate will pit two starkly different politicians against one another.

Cheney: elder statesmen, bald, gruff and staid, with decades of public service behind him. Edwards: handsome, smooth and optimistic in disposition, with only one Senate term under his political belt. Edwards looks a young 51, while Cheney looks an old 63. Both are quick on their feet, highly skilled politicians.

"I will be surprised if either man loses his cool," said Sid Kraus, a professor of political communication at Cleveland State University.

Based on his stump speeches, Edwards will attempt to present Cheney as an out-of-touch Washington insider connected to the no-bid contracts of the company Cheney once headed, Halliburton.

Cheney, Republicans expect, will try to portray Edwards as a glib junior politician too inexperienced to assume the presidency. The vice president will emphasize his opponents past as a trial lawyer – dirty words to many. The words "frivolous lawsuits" are almost sure to be heard in Cheney's stern monotone.

But don't expect Edwards to be "shrill," senior Democratic campaign officials said. It will be the same, "nice" Edwards of the Democratic primary debates. Edwards will attempt to cast his as the politics of hope, while asserting Cheney embodies the politics of fear.

Utilizing the skills that earned him tens of millions as a trial lawyer, Edwards will attempt to attack Bush and Cheney without appearing downbeat.

"I can't think of a more vivid contrast, than the contrast between these two men and what they represent," said Tad Devine, the Kerry-Edwards campaign chief strategist. "Cheney is the past and Edwards is the future."

Both candidates have practiced with mock opponents. To avoid appearing more severe than merely serious, Cheney has attempted to also get some rest and relaxation. He even went fly fishing on Monday.

Hoping to reassure voters of his qualifications, Edwards has pored over issue briefs at a resort in New York. Tuesday, Edwards will go for his daily run during the day and eat dinner with his family prior to the debate.

We will probably have a debate that will set a 20-year record for a VP debates ... probably 40 million people will watch," said Matt Dowd, Bush-Cheney chief strategist. "Voters are keenly interested and want to get a measure of these two men."

With possibly 10 percent of the electorate still not solidly in either camp, both campaigns now believe Tuesday's debate could shift the polls by at least 2 or 3 points.

In what will be the only match up between the vice presidential nominees, viewers can expect too vastly differing portrayals of the wars in Iraq and against terrorism. Cheney will present them as one-and-the-same. The vice president will emphasize the capture of Saddam Hussein.

In the war on terror, Cheney will likely point to the terrorists now in U.S. custody. He will note that Afghanistan is scheduled to have its first free elections on Saturday. Cheney will cite both Edwards and Kerry's votes for the war in Iraq and then against a later supplemental bill of $87 billion, senior officials in the Bush-Cheney campaign said.

Voters can expect Cheney to cite the Republican coined "Kerry doctrine," said Nicole Devenish, Bush-Cheney campaign communications director. Cheney's assertion will be that Kerry would give the United Nations, or allies, a veto over U.S. military action.

Devenish said Cheney will make it clear that "at best we have an alarming contradiction." The contradiction, Cheney will claim, is that Kerry insists he will not cede the sovereignty of the U.S. military but also persists to criticize the president for not gaining allied support.

Edwards will speak to the ongoing instability in Iraq and accuse Mr. Bush of inadequate post-war planning. He will echo Kerry's charge that the war in Iraq was a distraction from the war on terrorism, insinuating Mr. Bush let Osama bin Laden escape.

The North Carolina senator will also charge that Cheney is the "last person on the face of the earth that still makes the argument that Saddam Hussein was behind the attacks of Sept. 11," said Joe Lockhart, a senior adviser to the Kerry-Edwards campaign.

Edwards' big themes: Both Mr. Bush and Cheney put special interests above the middle class and have mismanaged the war on terrorism.

Cheney's rebuttal: Both Kerry and Edwards are pandering politicians who lack the consistency necessary to lead America in trying times.

Unlike when Kerry and Mr. Bush squared off, the two men will not be at a podium. In a format that both campaigns agrees favors Cheney, they will sit side-by-side with the moderator, Gwen Ifill of PBS.

The low-key setting, the inability to walk and engage an audience, all favor Cheney's subdued and serious disposition.

"It is a very relaxed atmosphere for Cheney, everything will seem like an afterthought," Kraus said. "It's going to be very difficult for Edwards. Cheney has had the experience of sitting down with Lieberman."

In 2000, The Democratic vice presidential nominee, Sen. Joe Lieberman, D-C., expected Cheney to be on the attack. Instead, Cheney was cordial. Edwards did not consult Lieberman as he prepared. But Democrats expect Cheney to be more aggressive this time around.

But as with Thursday night, non-verbal gestures by the candidates could be as pertinent as the arguments made. Mr. Bush's peevish disposition in the first debate is thought to have benefited Kerry. Both campaigns will be prepared for split-screen camera shots.

"The two-shots [by the camera] will be as revealing as the single-shots," Kraus continued. "I would look for if Edwards is fidgeting around in his chair. And if Cheney drops his head, he's in trouble."