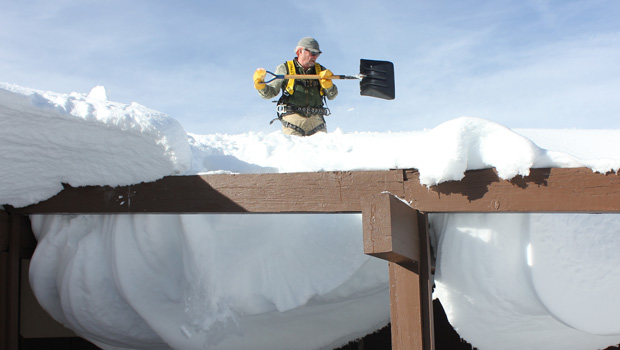 While most people around the country have just about had it with this winter that never ends, one man is reveling in its quiet and solitude in northwestern Wyoming. And why not? He's the Winter Keeper at Yellowstone National Park. Our Cover Story is reported by Lee Cowan:

He's the winter caretaker of Yellowstone National Park -- one of just a handful of hearty souls who remain in this wilderness long after the Summer tourists have gone.


"What an extraordinary landscape, huh?" he said. "You see all kinds of animals passing through -- Grizzly bears, big herds of bison, elk.

"When you're out alone, you don't want to make any noise. You wanna whisper if you're talking."

Cowan asked, "How do you describe your job here?"

"I usually start off with caretaker, and their immediate response is, 'Have you seen 'The Shining'?" he laughed.

A peak inside Yellowstone's deserted Canyon Lodge, and you can see why.

"The expectation was that you were in here for the winter," he said. "You got snowed in until you got plowed out."

The closest town is at least two hours away, by snowmobile. Or snow coach -- that's how we got to Steve.

"This job has never been by the calendar or by the clock," Fuller said. "You work with the Winter. You work with Mother Nature."

He lives in one of the oldest structures in the park, a small cabin on a hill that boasts the only light for miles.

He doesn't have a television, but does have a vast library.

At night, when Yellowstone's temperatures can dip to 20 below zero, his books keep him company, as well as his cats. His kitchen is crammed with just enough food to make it through the winter.

Most Yellowstone Winter Keepers last only a few years tops. But Steve has stuck out this solitary existence for 42 years, ever since the winter of 1973.

"Even that didn't discourage you?" asked Cowan.

"What do you think the value of solitude is?"

He raised a family here -- home schooling his two daughters and teaching them the ways of Nature. They've gone on to live their own lives -- as did his wife -- but Steve says he fit best, staying put.

"It seems like it's the kind of job that would suit a hermit pretty well, or an eccentric pretty well," said Cowan. "How would you describe yourself?"

"Never thought of myself as a hermit. You know, I enjoy solitary time, but I very much enjoy people, too."

"Do you get lonely?"

"Never," he replied. "Never have. Never had cabin fever. Never been bored."

There is a lot to keep him busy, and preparation starts early. While parts of the Park remain open, many of the facilities have to be tucked in for the Park's long winter's nap, which starts the first Monday in November.

It's a flurry of activity that seems to send a message to the other residents of the Park as well: "Animals move in as people move out," said Fuller, "and re-take the real estate."

With just a few days left before Fuller is left alone, Cowan watched his crew complete a "to-do" list a mile long.

At an elevation of more than 7,000 feet, the transition can be fast. The weight of winter threatens to crush the Lodge and other buildings in his keep. "It's one of my hundred problems here," Fuller said. "I've got about a hundred buildings."

"That's tons of snow up there, right?" said Cowan.

He's worked out a system -- not so much shoveling as sawing the buildings free of their burden.

He makes it look easy. But it's a workout -- even for someone half of Steve's 70-something weather-worn years.

How old is Fuller? "Oh, old as the hills. I always said you'll live forever if it doesn't kill you, doing this work!"

But it's not ALL work. Steve has never let a Winter slip by without capturing it with his camera.

"I've seen many wonderful things here," he said. "Occasionally get a picture of them. But a lot of the great pictures are in my head, you know, that you couldn't quite pull it off with a camera.

"All of this steam and moisture becomes super-cooled, so every time they touch something, they flash-freeze. Frost crystals, ice crystals are light-catchers. They're like jewels."

Some of the jewels he's photographed have even been featured in National Geographic.

But seeing is only the half of it. Yellowstone has taught Steve to listen, too, especially in the Park's geothermal areas.

"There's all kind of interesting sounds out here," he said. "This is the obvious one, a roar. Sometimes you'll think you hear voices, and actually it's a spring bubbling and talking."

The sound of snow plows, however, will soon be heard in the Park, usually around the end of this month, making way for the estimated 3 million tourists who will flock here over the Summer -- what Steve calls "the coming and going of the great primate migration. Part of living in Yellowstone.

"I've always thought that, you know, winter keepers kinda require a lot of solitude, a lot of empty space, a lot of quiet. And of course all of that is evaporating."

Quicker and more reliable transportation in and out of the Park these days has made the winter keeper job not only less solitary, but a little less relevant, too.

Cowan asked, "Do you think you might be one of the last ones?"

"I suspect so," Fuller replied.

"Do you ever think about retiring?"

"I think of it. They say a lot of people die when they retire, you know?"

Being Yellowstone's Winter Keeper isn't a job for Steve Fuller -- it's a way of life. Solitary ... simple ... and spectacular.