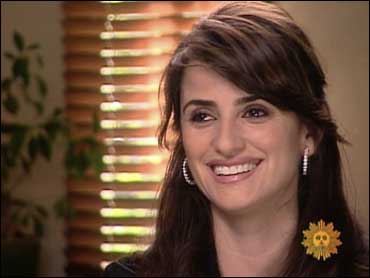 Penelope Cruz is an Academy Award nominee who followed her own unique path to the fabled red carpet. John Blackstone now with The Envelope Please …:

She's graced Hollywood red carpets for more than a decade, with looks that make her a photographers' favorite.

Now, Penelope Cruz is a favorite with film critics, too.

"If you get great reviews, like that is happening this year, they are so welcome, and I, of course, am excited about it," she said.

Excited, too, about her Academy Award nomination this year. "I am very excited about the nomination. And very grateful."

"I loved Maria Elena, yes. I mean, I hope I'm not too similar to her! And I didn't want to ever think, 'Oh, I'm playing a crazy person.' Because I mean, who's normal? I don't know anybody that is normal."

In this story about the intersecting relationships of one man and three women, her costars are Scarlett Johansson, Rebecca Hall and fellow Spaniard (and current boyfriend) Javier Bardem. The movie, set in Spain, gave her a chance to cut loose in her native language.

Working with Woody Allen she says, took some getting used to.

(Weinstein Company)
"I think I drove him crazy, asking for takes every single time! In every shot, I always ask for one or two or three more takes. And he was very kind. Actors love Woody, because he's very respectful."

Allen chose her after seeing her performance in "Volver," the 2006 Spanish-language film that earned Cruz her first Academy Award nomination for Best Actress.

"Volver" was made by Spanish director Pedro Almodovar, whose movies, Cruz says, she has admired since she was a child.

She grew up in a working class suburb of Madrid, the daughter of a mechanic and a beautician. She discovered the movies when she was 7 or 8 and her parents bought a video player.

"And they explained to me, 'Oh, you can go and rent movies every day.' And I would watch them over and over and over."

But she said she was not "brave" enough to dream about becoming an actress. Her first dream was to be a dancer.

Cruz studied ballet, until dance school led to theater school and at 17, she got her first movie role - opposite Javier Bardem - in "Jamon, Jamon," and almost instantly became a star in Spain. A string of Spanish movies followed and in 1997, she made her first film with Almodovar.

"And now, we have done already four movies together," Cruz said. "And he has become one of my closest friends. And I love working with him."

In 1998 she got her first role in an English-language movie, "The Hi Lo Country," though at the time she barely spoke English.

Language challenges didn't stop her from keeping busy in both Hollywood and Europe, sometimes making as many as four movies a year. Still, her insecurities linger.

"I feel every time I'm making a movie, I feel like if it was my first movie. Every time I have the same fear that I'm gonna be fired. And I'm not joking. Every movie, the first week, I always feel that they could fire me!"

In 2001 she made "Vanilla Sky" with Tom Cruise. Their three-year relationship that followed became a staple of gossip columns and tabloids, one reason there are some things Cruz refuses to discuss.

"You say you don't talk about your private life," Blackstone said.

"So, no point in me asking questions about your private life?"

"You're not gonna answer?"

"No. I never do. Once you break that rule, you know, it's hard to go back. For me, it's just common sense. It's just the natural reaction."

"That you have a life that's apart from your work that is no one else's business?" Blackstone asked.

Cruz is now getting more attention for her acting than her boyfriends. She starred opposite Ben Kingsley in "Elegy," which was also released last year.

And this year she'll be in two new films: Almodovar's "Broken Embraces," and a movie version of the Broadway musical "Nine." The cast includes Sophia Loren, to whom Cruz has been compared.

She said she can't listen to talk of comparisons, "because Sophia, for me, is such an icon and somebody that I have admired so much for so long. That's too big of a compliment. I don't think I deserve that."

What is ahead for Cruz this year may be a bit of a break from moviemaking. With her look-alike younger sister, Monica, she's designing and modeling a fashion line for a Spanish clothing chain.

"And also I want to do other things. Like rest, a little bit, and unpack boxes and things that I haven't been able to do in many years."

"So time to take a little time to enjoy the success that you're having right now?" Blackstone asked.

"And to live! Before I was from set to set to set, I was doing sometimes four movies in one year, and I don't regret it, because I love working. But right now I feel like I could not do that."

But taking it easy could be a challenge for an actress now in demand on two continents … by both moviemakers and photographers.