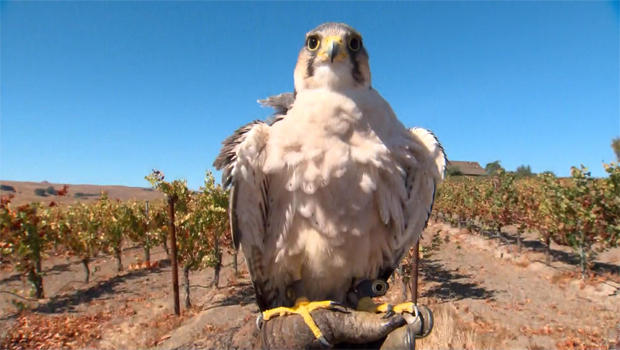 You may not know that falcons are sentinels -- watching over a number of our vineyards. John Blackstone has sent us a Dispatch from California Wine Country:

It’s no wonder Jack London once wrote about California wine country, “I have everything to make me glad I’m alive.” The rolling hills, the endless blue skies, and the perfect weather -- it’s a nature lover’s paradise.

But all that nature can be a problem. Just ask Rams Gate vineyard manager Ned Hill.

“Deer, rabbits, coyotes, raccoons, foxes, birds, you name it. Grapes are tasty when they get ripe!” he explained.

And so, like any cash crop, grapes need protection. And here, Beau Bastian, is the muscle.

Armed with a noisy motorcycle and a determined terrier named Gus, Bastian patrols the grounds. But perhaps the most important member of his security team is the one who patrols the skies.

Zuke, a male sheared peregrine falcon, is here to protect against starlings.

If henhouses have foxes, vineyards have starlings -- European starlings, an invasive species that first appeared in Northern California in the 1930s. As the vineyards grew, they spread out like a picnic lunch for the birds.

“Big flocks like that come into a field, they’re voracious,” said Hill. “And they can take care of stuff pretty quick.”

At first, Rams Gate tried the traditional methods, like noise makers, colored tape, and netting. None of it worked well.

“I just figured there had to be a better way,” Hill told Blackstone. “I was getting frustrated with the amount of time and effort that we were putting into doing this bird netting. Even though it was somewhat successful, the birds were still pecking through it.”

So Hill brought in reinforcements. Hill hired Kathleen Tigan and her apprentice, Beau, to help protect his crop. She introduced Blackstone to one falcon, named Larry.

“He doesn’t when he’s sitting,” said Tigan, “but birds aren’t designed for sitting on the ground. But when he’s in flight, he’s pretty scary.”

“What do these birds think when they see a falcon?”

Why does falcontry abatement work?  “Because it’s nature,” Tigan said. “We’re not doing anything different than what happens in nature. We’re using nature against nature.”

And vineyard manager Ned Hill says it’s a pretty good matchup. When asked how much better the falcons have made it, he replied, “I think it’s a solid 50 percent.”

Which translates to saving about $250,000 a year in production.

“The lack of yield that we would get because the birds were physically eating the berries, the compromised clusters that come in that we need to sort through and get rid of, there’s a 50 percent difference now having the falcon work for us,” Hill said.

Because falcons can be dangerous, they’re highly regulated. According to Tigan, it’s illegal to possess a falcon or a bird of prey without a permit issued by the federal government.

To become a licensed falconer, like Tigan, can take years. “You undergo a two-year apprenticeship to become a falconer,” she said. “And then at ten years you become a master falconer.”

Beau Bastian is serving his apprenticeship with Tigan’s company in the hopes that one day he’ll be a master falconer himself.

“You get to watch your animals do their job, and they love their job,” he said. “At the end of the day when you’re putting your birds up and you’ve done a good job of protecting a vineyard, that feels good, you know? So it’s all cool stuff.”

In case you were wondering, no starlings were harmed in the making of this story.  The falcons just scare the birds, chase them away, then return for a reward -- a tasty piece of previously frozen quail.