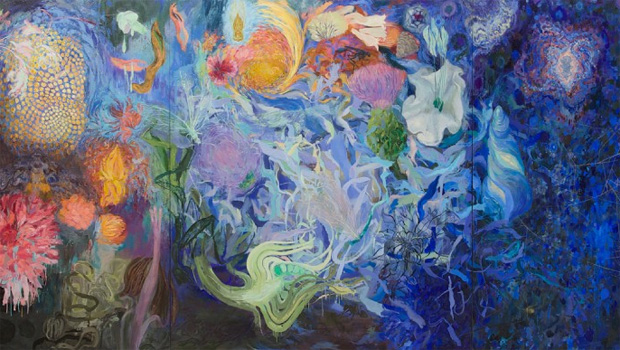 Calling all unknown artists! A team of talent scouts has been scouring the country in search of unrecognized talent, and our Anna Werner has gone along:

It's an unusual art hunt -- one that launched two men on a nine-month road trip across America.

Museum president Don Bacigalupi and curator Chad Alligood, are emissaries from the Crystal Bridges Museum of American Art in Bentonville, Ark., a museum founded by Alice Walton, the Wal-Mart heiress.

Their mission: To find undiscovered artists across the country, to showcase in a one-of-a-kind, contemporary art show in America's heartland.

The idea, said Bacigalupi, was that "wherever you come from, wherever you live, there might be a great genius artist working right next door, and if you haven't paid attention to that, it's worth doing."

Together the pair have visited nearly 1,000 studios in 44 states, logging over 100,000 miles along the way, often to places GPS couldn't find, and curators never visit.

Everything from a goat farm in Florida, to an abandoned church in Texas, to a converted school in rural Kansas.

Werner asked, "Why was this so compelling to you, the idea that you would get to travel, oh, 50,000 miles and go into basements and garages, out in farm fields?"

"I have to tell you, I didn't quite know about the basements and garages and farm fields part," Alligood said. "But the scope of the project was such that I knew I couldn't turn it down."

With each visit, the curators found artists working in new and imaginative ways -- drawing animals with smoke . . . weaving with string . . . and painting with plastic.

"You would never guess from across the room that what you're looking at is plastic recyclables grilled in the back ally of a Boston neighborhood," said Alligood. "Plastic trash transformed at the hands of an artist."

In Pittsburgh, they met Vanessa German, who combines a passion for helping her own troubled neighborhood with her work.

"She works in a very difficult neighborhood of Pittsburgh call Homewood," said Bacigalupi. "Her children were murdered and all kinds of street crime happened. And she makes these figures, and she imbues them with the power to protect those people."

An artist who's an environmentalist uses trash from the ocean to re-create a famous work by Piet Mondrian.

Limewood -- used for centuries for elaborate carvings in European churches -- is used to form modern-day objects: a cell phone . . . a watch . . . car keys.

And a wall-size painting bursts with the colors of the natural world. It's the work of A. Mary Kay, who the curators found painting in the gymnasium of a converted school in Lindsborg, Kan., that also serves as her home.

Kay draws her inspiration from the land -- the flora and fauna found on the prairie around her.

Werner asked what her reaction was when the Crystal Bridges curators called: "I was thrilled. I mean, I was very surprised, I was delighted, was very nervous! It's just very moving to have somebody come into the studio and really see your work."

On the same trip, the team visited Wichita, Kan., to see the work of artist Randy Regier.

Regier is an installation artist, whose traveling "toy store" pops up unannounced, in locations as far apart as Maine and Florida. Viewers are left to decide for themselves why and how it got there.

"It can be very sort of haunted and despairing in one place, and very sort of monumental and sculpturesque in another," he said. "It relies heavily on context."

Werner asked, "What drives you to take this stand and want to put it in different places around the country, and then just watch people react to it?"

"Well, the funny thing is, I don't actually watch people. I just drive away! He laughed. "What drives me to do it is the idea that that it's worthwhile to create an experience that people can have, or will have, or stumble upon, that is unexplained, maybe inexplicable."

So inexplicable, that it prompted a letter from an 11-year-old girl in Riverside, Ill.:

"Your little stand appeared out of nowhere, right next to my friend's house, and we freaked out! I know I am annoying and weird, and it is okay if you say "no." But can you send me a key so I can get in? I dropped something in there near the bottom of the door, and because I won't take anything. I'm young and you can trust me."

"If this is what I get out of my work," said Regier, "what more do you want?"

Regier's installation now sits in downtown Bentonville, part of a collection of 227 works from more than 100 artists.

"So do you think you've found the next Georgia O'Keeffe? The next Jackson Pollock?" asked Werner.

"All of the above, and then some," replied museum president Don Bacigalupi.

It's one of the largest exhibitions of its kind in the country -- an exhibit that's already drawing crowds to see thought-provoking work.

"Artists in this country are the people you are buying bread next to you in the grocery store," said curator Chad Alligood. "They are teaching your children at pre-school. They are part of the fabric of our lives."