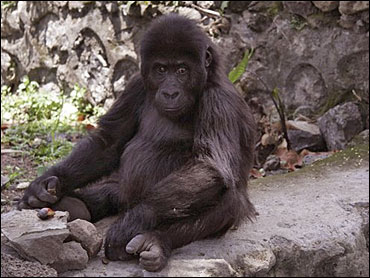 A young gorilla in a Congo sanctuary is smashing palm nuts between two rocks to extract oil, surprising and intriguing scientists who say they have much to learn about what gorillas can do, and about what it says about evolution.

It had been thought that the premeditated use of stones and sticks to accomplish a task like cracking nuts was restricted to humans and the smaller, more agile chimpanzees.

"This is a surprising finding, given what we know about tool use in gorillas," Dian Fossey Gorilla Fund primatologist Patrick Mehlman said earlier this month at his Goma office.

He said the finding indicates that complex tool use may not be a trait developed only by humans and chimpanzees and could have its origins earlier in the evolutionary chain, among ancestors common to both humans and their closest relatives, the great apes.

Gottfried Hohmann, an expert on primates at the Max Planck Institute in Germany, told The Associated Press that Itebero's behavior "means that gorillas have a higher level of understanding of their environment than we thought."

Itebero has been living in the sanctuary for a year, since local authorities confiscated her from poachers. Mehlman said he believed Itebero, named for a place near where she was found, started cracking nuts spontaneously and was not influenced by humans.

Alecia Lilly, a primatologist in Rwanda who worked for over a decade with captive gorillas in South Carolina and has seen Itebero at work, said most learning among gorillas occurs through imitation. But Itebero had no instructor, alone in her sanctuary with her keeper.

"Itebero is remarkably proficient at cracking nuts," Lilly told the AP. "It takes most chimpanzees many years to reach similar levels of proficiency."

Itebero's actions led some scientists to believe that gorillas in the wild might exhibit complex tool use as well, though no one has reported such behavior.

Earlier this year, researchers reported observing gorillas in the wild in the neighboring Republic of Congo's rain forests using simple tools, according to a team led by Thomas Breuer of the Wildlife Conservation Society at the Bronx Zoo.

In an e-mail message Monday from the Republic of Congo's Nouabale-Ndoki National Park, Breuer said that in 10 years of observation, his team had seen only two instances of tool use among gorillas, a stick used to test the depth of a pond, and a small tree trunk used for support and as a bridge.

Breuer said it was difficult to compare the behaviors his team witnessed in the wild with the more complex behavior exhibited by Itebero, who had had contact with humans. But he said Itebero's action "clearly shows that gorillas have the capability to use sophisticated tools even if they do not, or rarely, do this.

"Very often the use of tools is triggered by certain needs and it seems that gorillas have only little need to use tools in the wild," Breuer said.

Moral dilemma of self-driving cars: Which lives to save in a crash