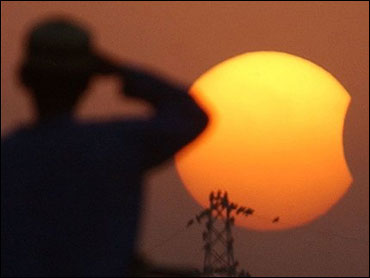 Millions of people watched the first total eclipse in years track across the southern sky Wednesday.

Thousands of Egyptians, tourists and astronomers — and the Egyptian president — watched Wednesday's total solar eclipse from a prime location, an isolated desert town on the Libyan border, where darkness fell and stars appeared in the daytime sky.

Schoolchildren in Accra cheered as the first total eclipse in years plunged Ghana into daytime darkness Wednesday, a solar show sweeping northeast from Brazil to Mongolia.

Williams College astronomy professor Jay Pasachoff witnessed the eclipse on a tiny Greek island off the coast of Turkey, and described it for CBS Radio News (audio).

As the heavens and Earth moved into rare alignment, all that could be seen of the sun were the rays of its corona — the usually invisible extended atmosphere of the sun that glowed a dull yellow for about three minutes.

The town of Salloum, Egypt, lay nearly dead center on the path of the total eclipse, giving spectators there nearly four minutes of darkness. Astronomers from six countries, including NASA scientists from the United States, came to Salloum to observe.

They were joined by some 8,000 tourists, hundreds of journalists, and Egyptian President Hosni Mubarak, his wife and several ministers, who arrived in a convoy of several vehicles as folklore troupes played popular Egyptian music.

The site — usually visited only by workers and truckers crossing the border — was turned into an impromptu tourist draw: a two-mile stretch of beach was set up a day earlier with umbrellas, chairs and coffee-shops, and a firework show was given Tuesday night.

Several Egyptian television stations and the Al-Jazeera news network showed live footage from Salloum as the moon covered the sun, and at around 12:38 p.m. Wednesday the sky went black and a few bright stars appeared as the popular music went higher.

In Accra, automatic street lights flickered on, authorities sounded whistles and schoolchildren burst into applause across Ghana's capital. Many in the deeply religious country of Christians and Muslims said the phenomenon bolstered their faith.

"I believe it's a wonderful work of God, despite all what the scientists say," said Solomon Pomenya, a 52-year old doctor. "This tells me that God is a true engineer."

The last such eclipse in November 2003 was best viewed from Antarctica, said Alex Young, a NASA scientist involved in solar research.

In Turkey's Mediterranean town of Side, hundreds of people streamed down a main street, some carrying tripods, to an ancient Greek temple dedicated to Apollo, as market sellers hawked T-shirts and protective glasses.

Joaquim Boix traveled from Barcelona, Spain, to view the eclipse. He said he became addicted to eclipses after seeing one in Germany.

An ancient Roman theater in Side, astronomers and scientists from NASA and the San Francisco-based Exploratorium science museum made last-minute preparations for a live broadcast. The theater, which had a capacity of 15,000 in ancient times, was expected to host 2,000 people.

"It's one of those experiences that makes you feel like you're part of the larger universe," said NASA astronomer Janet Luhman.

In Rome itself, where only 60 percent of the sun was obscured, people paused to watch the eclipse.

"Well it's a little bit opaque, but you can see it clearly," said a man dressed in a Roman gladiator costume.

"You can see almost only the half of the sun. It's beautiful, beautiful," said a more conventionally-dressed woman.

Tens of thousands of tourists were expected along the Turkish Mediterranean coast, which NASA said would be the best spot to view the eclipse. Turks welcomed the tourism boost after a recent bird flu outbreak and protests over the caricatures of Islam's Prophet Muhammad.

"It should happen more often," said Hamza Bikmaz who was selling eclipse T-shirts outside the theater.

From Ghana to Libya and Syria, schools closed and streets emptied. West African governments scrambled to educate people about the dangers of looking at the eclipse without proper eye protection.

In Togo, authorities imported hundreds of thousands of pairs of special glasses that consumers cleared rapidly from shelves in the capital, Lome. But villagers in the interior did not have access to the eyewear and officials called on them to stay home.

"Imagine if your hair was to stand up from static electricity, that's kind of what the corona looks like all around the sun," NASA's Young said. But the corona's light can burn eyes.

Superstition accompanied the eclipse's path, as it has for generations.

One Indian paper advised pregnant women not to go outside during the eclipse to avoid having a blind baby or one with a cleft lip. Food cooked before the eclipse should be thrown out afterward because it will be impure and those who are holding a knife or ax during the eclipse will cut themselves, the Hindustan Times added.

In Turkey's earthquake-prone Tokat province, residents set up tents outside despite assurances from scientists that there was no evidence of any link between eclipses and tremors.

In August 1999, an earthquake in northwestern Turkey killed some 17,000 people just six days after a solar eclipse.

Total eclipses are rare because they require the tilted orbits of the sun, moon and earth to line up exactly so that the moon obscures the sun completely. The next total eclipse will occur in 2008.