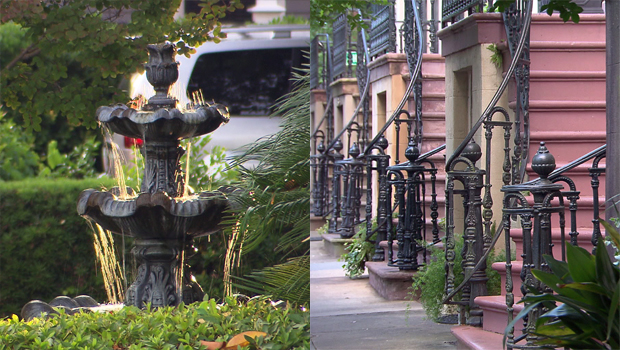 How Charleston, South Carolina, and Savannah, Georgia -- both more than 200 years old -- they deal with the challenge of historic preservation makes for a genuine Tale of Two Cities. Our Cover Story is reported by Lee Cowan:

They are two belles of the South -- Savannah, Georgia; and Charleston, South Carolina.

About 100 miles apart, they have been rivals for centuries, debating everything from which has the best manners, to which makes the sweetest tea. But these cities have something in common, too: How to preserve their moss-draped Southern charm without turning their backs on progress.

"There's a lot of jealously between the two of 'em, I must say," said retired American history professor John Duncan. He was born in Charleston, but has spent the last 50 years in Savannah. His home, off Monterey Square, was built in 1869.

So, Cowan asked, "How can you keep a city like this charming, and preserve its history, and yet still move forward at the same time?"

"Well, many Savannahians would say, 'We wouldn't want to move forward at the same time. We're happy just the way we are, thank you very much,'" said Duncan.

Many in Charleston might say the same thing. And that's the design dilemma.

While it's tempting to want to put these historic cities in formaldehyde, to embalm them and shun anything modern, Charleston Mayor Joe Riley says that's not a viable answer.

"A historic city should be a living place," Riley said. "Because if you don't have that, then it's a former something. A former once-great city that now is pretty to see."

Charleston has the oldest historic district in the country. It's carefully preserved the city's grand public buildings, as well as the mansions along the Battery, and of course, the famous Rainbow Row.

The city's signature, however, is the Charleston "single house" -- tall, slender homes with two-tiered piazzas (we'd call them porches) that often look out over a private garden. It's an architectural fabric that new buildings have a hard time matching.

"You know, it's like there is this beautiful painting that has been painted and you have an opportunity to paint something within that beautiful painting," said Riley. "You've got to be careful that in what you paint there, you don't detract from the overall context of what has been created."

It's up to Charleston's Board of Architectural Review to approve new construction. Sometimes the mayor himself gets involved, as he did with the architect of a proposed parking garage.

What resulted was a garage that actually won the Federal Design Achievement Award.

Charleston Place, a 400-room hotel, passed the city's muster, but only after it was built to fit with the style of the buildings around it. The same is true of a $142 million performance hall set to open in October.

"What we're having now is a bit of clash of values, as it were, in trying to determine how do we find that right balance?" said Huff. "And that's a difficult proposition."

When Clemson University designed a contemporary building to house the school's architecture center, it was met with such opposition the plans had to be scrapped. While Huff will miss the design, he accepted the city's decision.

"The process of going through, getting permits and what have you for a building is an extremely difficult process in Charleston," said Huff.

The same debate is ringing throughout Savannah. although here, historic preservation takes on a little different tone.

Christian Sottile, the Dean of the School of Building Arts at the Savannah College of Art and Design, told Cowan that Savannah is accepting of contemporary architecture: "I think we embrace it, but we ask serious questions about whether this building will contribute to the city," he said.

Christian Sottile is the Dean of the School of Building Arts at the Savannah College of Art and Design -- and the architect behind the school's new Museum of Art. "We set out to design a building that would communicate over three centuries," he said.

It's a contemporary building, but one that incorporates what was left of the oldest surviving antebellum railroad depot in the country.

The depot is just one of more than 70 historic sites that Savannah's College of Art and Design has saved and re-purposed -- everything from a former county jail, to what used to be a 19th century armory.

"It really is a living laboratory," Sotille said.

Many of the buildings look out on perhaps Savannah's best known feature: its squares. There are 22 of them in all, a design unique to the city. In fact, Savannah is considered one of the nation's first planned cities.

While it's not as old as Charleston, Savannah's historic district is much larger, stretching from the waterfront (where buildings like Savannah's Cotton Exchange still stand), to neighborhoods where homes with gas lanterns and intricate iron work sit beneath the Spanish moss.

For purists, this is what makes Savannah - and the new can still spark controversy. The 64,000-square-foot Jepson Center for the Arts, designed by Moshe Safdie, was pretty tough to get by Savannah's Historic Review Board -- and some still don't like it today.

"It's got a grand staircase, filled with glass, but maybe not so appropriate for a historic city like Savannah," said Duncan.

These port cities of the South -- Savannah and Charleston -- are survivors. They've outlived fires, hurricanes, slavery and, of course, war. They surely will survive design disputes -- but not without a fight.