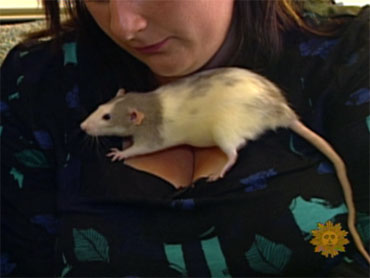 In this story, which originally aired Oct. 19, 2008, CBS News Correspondent Martha Teichner takes a closer look at whether rats are really as bad as they're made out to be.

Bobby Corrigan may be the only man in New York City who usually carries rats in his backpack.

"Although there's stories (of rats) as big as alley cats," Corrigan says, "the weight comes in at about a pound when it's alive."

Corrigan is the city's rat czar, officially an urban rodentologist. In a typical alley here, Corrigan finds lots of garbage bags and a homeless man with a boombox at the far end. But after getting past the gross-out factor, he shows that rats are actually interesting.

When you see one, you're not far from that rat's home. Rats usually live within a hundred feet of where you see them. "They'll tunnel below the cement and the nest literally could be below your feet," Corrigan says.

Those tunnels don't have to be very big. "A rat can squeeze through a hole the size of a quarter," Corrigan says.

Corrigan even has a name for rats' natural instincts to live in compact spaces.

"It's called huggamuggering," he says. "They'll get below ground in very small areas, and a whole family of rats can fit in a size of an area of just about half a basketball, for example, and they'll huggamugger together."

Anyone who's ever seen the movie "Willard" knows people are conditioned to be terrified of rats. When rats bite, we're talking about 6,000 pounds of pressure per square inch. Their teeth never stop growing. Rats gnash their teeth and gnaw to keep them ground down.

Fleas on rats carried the plague to Europe during the 14th century. An estimated 75 million people died, but those were black rats.

Your average city rat, not prone to plague-infected fleas, is called the Norway rat (even though it came from Asia, not Scandinavia).

She works near a bat-detector, which picks up sounds a bat or a rat makes which are too high for the human ear to detect.

The machine converts the sounds from the high frequency down to a frequency that humans can decipher.

"Just as when two children are out on the playground potentially or in the living room on the couch or tickling one another and giggling and laughing, that's what it looked like to us, and so we've been calling it 'rat laughter.'"

So can animals who laugh be all bad?

Rat breeder Meghan Rabon of northern New Jersey doesn't think so. She has 35 rats, and Rabon's named all of them. They can learn to come when called.

Rabon's rats are Norway rats, just like the ones in dark alleys, but somehow with Rabon they seem different.

Rabon has a bunch of baby rats that are about a week old. She says they grow very fast and by the time these little creatures are six weeks old - if left to their own devices - they'll be multiplying exponentially.

A female can have a dozen or so pups (as the babies are called) every three weeks.

So is it true or false that in New York there's a rat for every person?

"The one-rat-per-person is totally a myth," Corrigan says. "I'm going to say it's far less."

Corrigan prowls the city at night, like a rat detective. But after a career of trying to eradicate them, he says, "Actually I love rats."
By CBS News Correspondent Martha Teichner

A.J. Croce on reconnecting with his father, Jim Croce
Thanks for reading CBS NEWS.
Create your free account or log in
for more features.
View CBS News In
CBS News App Open
Chrome Safari Continue
Be the first to know
Get browser notifications for breaking news, live events, and exclusive reporting.