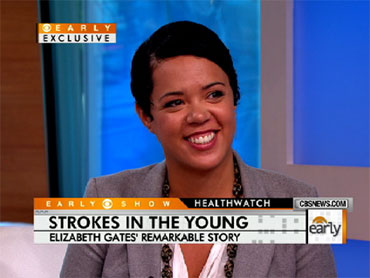 Stroke is the third leading cause of death in the United States. Many of the victims are eldery, but a third of those affected by stroke are under 65 --and sometimes much younger than that.

Elizabeth Gates, the daughter of prominent Harvard professor Henry Louis Gates, is in her twenties and suffered a severe stroke just four months ago. And remarkably, she's now able to talk about it.

So how did Elizabeth know she had suffered from a stroke?

After an evening at a bachelorette party this May, 28-year-old Elizabeth Gates woke up with what she thought was a hangover.

"I couldn't move at all it was horrible. I called my friends in the room. I tried to say, 'What the hell is going on?', but all I could say was 'What?'" she said.

Elizabeth had suffered a stroke, her mind irreparably harmed. An X-ray showed a bright portion that revealed just how much of her brain tissue was destroyed.

"She was not able to speak, read or write and her comprehension was impaired. So she was severely disabled when we saw her initially," Dr. Galen Henderson, Director of Neuroscience at Brigham and Women's Hospital, explained.

We first met Elizabeth on "The Early Show" last year after her father, Harvard professor Henry Louis Gates, was arrested in his Cambridge home by a white police officer; the racially-charged debate that followed led to last summer's "beer summit" at the White House.

"If it's left as is I think we are going to rely on what our preconceived notions of race have been for so long," she told "Early Show" co-anchor Harry Smith in an earlier interview.

Within a year, the woman who spoke so eloquently of her father was without a voice.

Her parents were determined to help her recover.

"I just wasn't going to let her be impaired without a fight," said Sharon Adams, Elizabeth's mother.

Sharon quickly tried to find ways to get her daughter's speech back.

"My mom was a genius and got me the (language learning software) English Rosetta Stone," Elizabeth said. "I would spend and hour with a speech pathologist and the rest of the day on Rosetta Stone."

On trips to the hospital, Elizabeth's mother pointed out everything from stop signs to streetlamps.

"For two solid months just together in the car and identifying objects -- just rebuilding her brain," Sharon said.

Before her stroke, Elizabeth worked as a writer for the popular website "The Daily Beast," a career -- doctor's believe -- may have helped her recover even faster.

"Her being a writer does help her plasticity of the brain because the brain does try to rewire itself," Dr. Henderson said.

Just four months since her stroke, Elizabeth is back at home and back at work too.

Her recovery continues to amaze her doctors and family.

"She is a phenomenal woman and I am proud to be her mother," Sharon said.