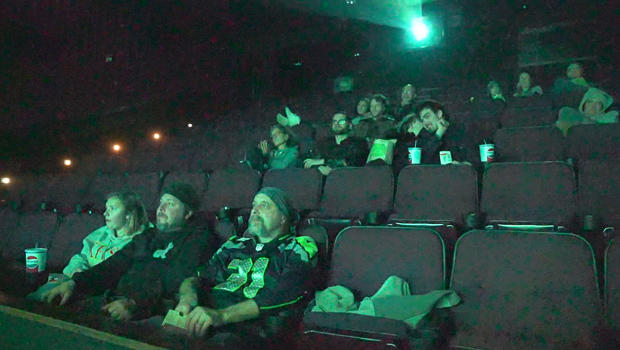 If you call the Firehouse Theater in Kingston, Washington, you'll get a personal message from the projectionist himself, Craig Smith. "'Star Wars' will play Sunday at 12:00, 3:15, and that's a special costume show … See ya' at the movies!"

Smith said, "I walk into the grocery store here and they ask me what's playing.  I'm a walking billboard, you know? Marquee! I'm the movie guy."

That movie guy is also the ticket guy, the popcorn guy ("You said yes to butter, right?"), and in some cases he's even the door guy, helping out patrons overloaded with popcorn buckets.

"This isn't just a business to you, is it?" asked correspondent Lee Cowan.

At 65, Smith has loved movies his whole life. Going to the movies as a kid seemed like a turnstile to another world. "I remember the first time I saw 'Gone With the Wind.' I remember getting in trouble 'cause I sat through it a second time."

"You watched eight hours' worth of 'Gone With the Wind'?" Cowan asked.

So, she wasn't surprised when about ten years ago he took a leap of faith, and turned Kingston's old firehouse into its only movie house.

It was risky. Kingston only has but 2,000 or so residents. It sits on the shores of Appletree Cove across Puget Sound from Seattle, known more for its ferry terminal than its downtown nightlife.

Cowan asked, "So, were there some raised eyebrows? Friends and family saying, 'Are you sure you wanna do this?'"

"Oh yeah. You know, you always get that," said Smith. "But, you know, even if you fail, at least you tried, you know?"

Try, he did … and succeeded, too, at least in making his movie house feel more like a home.

"This place is so special," said one customer, Karen. "It's just a cozy community theater that you don't find anymore."

Little things matter in a little theater, like real butter on the popcorn; freezing his Junior Mints, for the real candy connoisseur; and greeting the audience in person. "He comes in and he gives you a little personal account of the history of the movie, how they made it, who the actors are, actresses," said Tanya.

"Welcome everybody to the Firehouse Theater, the Main Stage, to see 'Star Wars: The Rise of Skywalker.'"

And he does it for every showing, even if the theater is practically empty.

"Thanks a lot for coming and enjoy the show!"

"It's a great community service that he does for us, and I think it's hard for him to keep it open," Tanya said.

That's the worst-kept secret in town. Smith said, "This has got my life savings wrapped up in it. It's about a half a million dollars. I've run outta money a few times and had to renegotiate a lease.  And used some credit cards. You know, you just keep plugging on."

Smith's movie margins were already as slim as the 35mm film he used to run. Then, Hollywood made him go digital.  Movies are distributed these days on hard drives, and the new projectors set him back years on his debt.  "That was a choice of bankruptcy or not, to be honest," he said.

He even stopped taking a paycheck, and the stress soon took its toll. He had a heart attack on the job. "Yeah, I was up in the projection booth, not knowing I was having a heart attack," he said.

He came back to work after that, probably earlier than he should have, and word soon got around.

Fans of the Firehouse aren't about to let it go up in smoke. They've just set up a GoFundMe page, and organized volunteers to help behind the counter.

"It was instantaneous," said Gillian. "We had a bunch of folks really interested right away, and it just sort of blossomed after that."

If Smith ever thought his little theater didn't matter, the day he hosted a "Star Wars" costume party proved otherwise; it was pleasantly chaotic. The line of Jedis, stormtroopers and Wookiees was out the door.  "It's really touching," he said. "They're wonderful people."

The movies are meant to be an escape – a chance to forget about our problems in the dark for a while. But for Craig Smith, his little movie house has proven there are plenty of fairy tales off-screen as well.

"I got a Frank Capra life here, you know?" he said. "I get to do what I enjoy in life. You can't have it any better than that. It's a really nice life!"

UPDATE: Within 90 minutes of our broadcast, the Firehouse Theater GoFundMe page had $100,000 in donations from thousands of viewers; by Tuesday, February 11, donations had topped $181,000.