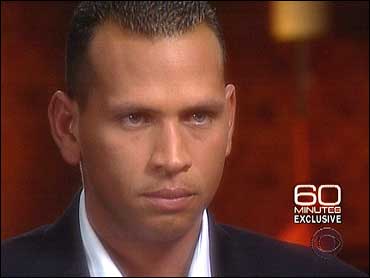 At the time, Rodriguez was playing for the Texas Rangers and was the year's American League home run king and MVP. Baseball did not have penalties for steroid use in 2003 and the results were to remain sealed and anonymous -- but in 2004 federal agents seized the records from a Long Beach, Calif., lab.

In a statement issued Saturday but the MLB, Executive Vice President of Labor Relations Rob Manfred said, "We are disturbed by the allegations... Because the survey testing that took place in 2003 was intended to be non-disciplinary and anonymous, we can not make any comment on the accuracy of this report as it pertains to the player named."

Dozens of baseball greats, including 7-time Cy Young award winner Roger Clemens, were outed for using steroids in George Mitchell's 2007 investigation. But Rodriguez was not known to be involved, and which aired three days after the Mitchell report was released, he denied ever taking steroids, human growth hormone or any other performance-enhancing substance.

"I've never felt overmatched on the baseball field," he told Couric. I felt that if I did my, my work as I've done since I was, you know, a rookie back in Seattle, I didn't have a problem competing at any level," he said.

Yankees fans were not kind in the wake of Saturday's report. "It shows that he's a hypocrite. A liar and a hypocrite," said fan Jonathan Ceresa.

So far Rodriguez has not commented on the allegations. CBS News placed calls to his agent Saturday but they were not returned.

"I just think that we've been through this so many times before, and we understand that during that period of what has been referred to as 'the steroid era,' there were so many players who were involved in this kind of activity. As the years go by, we're finding out about more and more of those. It's sad to say, but we can't be surprised any more."

Verducci added: "I think baseball and the union have done a very good job getting their handle on this problem. Listen, they'll never be able to fully eradicate drugs from the game. Just not the nature when you're dealing with competitive people, and when chemistry continues to develop to avoid testing. But the fact is, we are miles away from where we were, even going back to 2003."

Punishment for positive testing is much more severe now than it was in 2003, and it had appeared that MLB was getting over a tarnished hump.

However, Verducci said, "at least publicly this does pull baseball back into the vortex of steroids, and that as a public issue."

The revelations come at a time when baseball's focus on drugs has concerned Barry Bonds and the legal maneuvering leading to the start of his trial March 2. The government is trying to prove the home run king lied when he told a grand jury he never knowingly took performance-enhancing drugs.