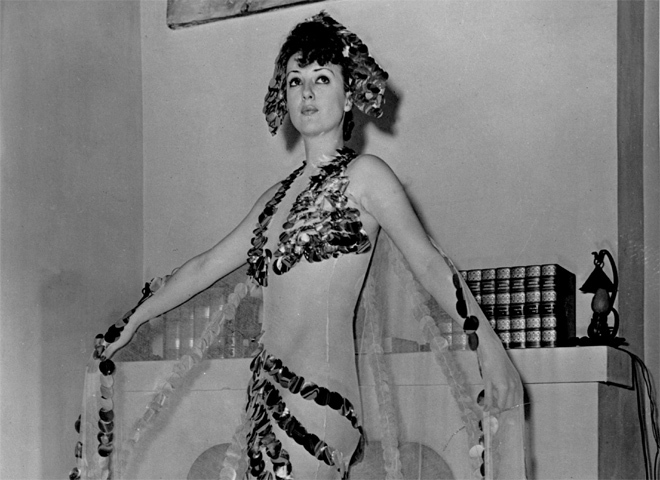 Gypsy Rose Lee was one of America's legendary entertainers. On this 100th anniversary of her birth, you may wonder just what makes her legacy endure. Rita Braver can explain:

In 1943 she played herself in "Stage Door Canteen."

By then she was famous: The beautiful and brainy stripper who became an international personality.

Above all, she was her own creation. Even her name was invented. She grew up as Rose Louise Hovik.

When asked if she ever explained why she chose the name "Gypsy," her son, Erik Lee Preminger, said, "Her favorite line about this is, 'Darling, I told that story so many different ways, I don't remember which one is true.'"

With 18 volumes of scrapbooks, Preminger is still discovering things about his mother.

"Why do you think people are still so interested in your mom?" asked Braver.

"Because people can't believe that a stripper could attract the kind of attention and praise that she did," he said.

Of course, most of us know her rags-to-riches story through the Broadway musical, "Gypsy," and the film starring Natalie Wood.

Let me entertain you,
Let me make you smile ...

The crowd heard from Karen Abbott, who's just written a new book about Gypsy:

"I like to say if Lady Gaga and Dorothy Parker had a secret love child, it would have been Gypsy Rose Lee," Abbott said.

But Gypsy's beginnings were a lot more humble.

Born in Seattle to Rose Hovick, an over-ambitious stage mother, the child was a disappointment.

Then along came Baby June.

"This child could spin on pointe like a ballerina at the age of two," Abbott said.

For years, Rose dragged her children around the Vaudeville Circuit. June was the star, with Gypsy relegated to bit player.

Reading was her escape:

"The kids used to call her 'The Duchess,'" said Preminger.

"Because they thought she put on airs?" Braver asked.

"And because she wouldn't play with them. She had her nose in a book all the time."

Preminger describes his grandmother Rose as "one of the most charming people that ever lived, but she was ruthless. Nothing got in her way."

But she was stymied in 1929. June (who later gained fame as actress June Havoc) eloped with one of the dancers.

Rose had to turn to Gypsy:

Abbott said nobody thought of Gypsy as star material. "No, not at all. But they were desperate."

Gypsy became the headliner. But by then Vaudeville was dying, and one fateful night in Kansas City, the story goes, Mama Rose was furious to find that they'd been mistakenly booked in a BURLESQUE HOUSE.

"But Gypsy realized the end of the line and said, 'No, this is what we're doing. This is the only thing that's left,'" Abbott said.

And, as the song says, "You gotta have a gimmick."

Gypsy got her gimmick. She was the demure stripper, discussing while disrobing.

Within a year, Gypsy was a sensation at the top burlesque theater in New York.

But she was not lucky in love. Married and divorced three times, she carried a torch for Mike Todd, who produced her successful show at the 1939 World's Fair.

The stories say she really would have liked to marry him and that she was kind of broken-hearted when he wouldn't marry her.

So Gypsy engineered a fling with film producer/director Otto Preminger.

Erik was the result - his 1944 birth documented in Life Magazine!

But until he was 22, his mother refused to reveal who his father was.

"And I asked her why she wouldn't tell me, and she said, 'It's none of your business,'" Preminger said.

"Who your father was?" Braver asked.

"Well, no, it was, 'It's none of your business who I slept with,' is how she interpreted it," Erik said.

He later connected with Preminger, and took his name. But for years it was life with Gypsy.

And what a life:

"When I was six months old, she wrapped me in a blanket, threw me in the front seat of the car, and started a two-year tour of nightclubs around the country," Preminger said.

She was a big hit overseas as well. So no wonder Edward R. Murrow and "Person-to-Person" came calling at Gypsy's fabulous New York mansion:

Gypsy became a celebrated writer, with pieces in The New Yorker, a murder mystery, and then her best-selling memoir, the basis for that Broadway musical.

She kept touring for years, went to Vietnam to entertain troops who, she said, considered her their sexy grandmother! She even hosted a talk show, with guests like Liberace.

Then, in 1970, Gypsy was diagnosed with lung cancer. She was gone in four months.

But in her centennial year, her life is an inspiration to a new generation, especially at the New York School of Burlesque.

"She kept it fun," Weldon said. "She allowed people to look at her as beautiful and still proved that she had a brain and a voice."