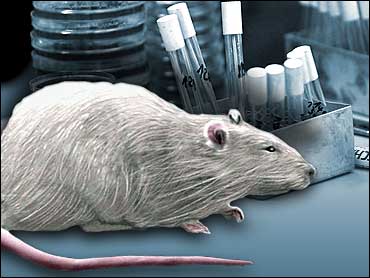 A new high-tech, hand-crafted rubber rat eventually could save the lives of millions of rodents used in laboratory experiments each year, say animal rights activists and the Dutch pharmaceutical company that developed the lifelike latex substitute.
About 3,000 rats are killed annually for educational or research purposes in the Netherlands alone, where rats and mice are used in more than 500,000 tests a year, according to the Dutch anti-animal research group Animal Testing Free.

"In the Netherlands, the alternative will save a couple hundred rats per year, but it's about more than just the animals which will be saved. It is proof that there are realistic alternatives," said spokeswoman Marja Zuidgeest.

PVC-Rat, as the new product is called, made its debut in March after years of research and development. The rat is specifically designed for micro-surgical laboratory experiments in universities, hospitals and clinics.

Although one other company makes an artificial rat used for practicing intravenous and oral drug administration, the PVC-Rat is the first alternative upon which surgical operations can be conducted.

"It looks like a real rat, but it's lying on its back with its stomach open and you can see veins and the liver and other organs," said Puck Bossert of Belgium-based Solvay Pharmaceuticals, the product's manufacturer.

Live animals are needed to simulate life signs such as blood pressure, heart rate and breathing during surgery. But Bert Zutphen, a professor of laboratory animal science at the University of Utrecht, said artery stitching and nerve fusion can be practiced just as well on the fake rats.

PVC-Rat can be used over and over by removing sutures after practice surgery, saving laboratory costs and rodent lives. "A dead rat is no good to anybody," said Zutphen.

Medical experts believe the alternative rat, which is made of recycled latex, will replace some trials in the medical field, particularly those in which real rats are used in dissection to train university students. But they say real animals will always be needed for testing.
Zutphen began experimenting with about 150 of the fake rats last year. Though they'll never completely replace live rats, he said, they're sufficient for introductory surgical techniques.

"A large portion of surgery can be learned without the use of real animals," Zutphen said, "but they will not replace live rats as an essential part of laboratory research."