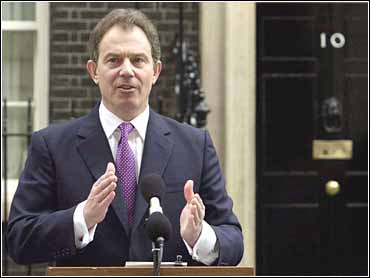 In his latest Against the Grain commentary, CBSNews.com's Dick Meyer says the Brits know the right way to run an election campaign – keep it short and sweet.


On Tuesday, May 8, Prime Minister Tony Blair announced that the United Kingdom's next general election would be held on Thursday, June 7. The official campaign will last exactly 30 days.

That news reminds us of what is most unattractive about American campaigns – their length.

Lots of countries have more corrupt elections than we do. Some might even have more expensive elections. But nowhere are the campaigns longer – at least nowhere I could think of; correct me if I'm wrong.

American election campaigns are too massive to measure. When did the last campaign start? Was it June 12, 1999, when George W. Bush formally announced? Was it October 14, 1999, when Al Gore aired the first official television commercial? Was it October 27, 1999, when the first primary debate was held? Or, to be generous, was it January 24, 2000, the day of the Iowa caucuses?

Never mind the tricky question of marking the actual end of the 2000 election. Any way you slice it and date it, American elections are the world's longest. And it doesn't appear that this distinction confers even the slightest benefit to voters and citizens. Indeed, political consultants and reporters are about the only people who can stomach these dull marathons.

Nor is there any particular reason why American campaigns need to be longer than in other countries. News isn't brought to Wyoming by stagecoach any longer. There's a common language. Our issues are no more vexing than anyone else's.

Canada, Mexico and Israel have all had peaceful, open, fair, informative, heated elections recently that didn't take 18 months – and they have big problems too. Italy and England will conclude concise campaigns in the coming weeks.

Even India does a better job. In 1996, 590 million voters went to 825,000 polling places staffed by some 5 million employees. It didn't take a year to prepare the electorate for the big day.

So what's our problem?

There are probably some persuasive rationalizations for 18-month campaigns, but I can't think of any. They are a tradition without much justification. Does anyone believe that pulverizing people with 30-second ads for a year is a good way to inform voters? Wouldn't a month be adequate?

And our campaigns demonstrably do not lead to high levels of voter participation and turnout by any international comparison.

The Brits are fretting that this year's contest may bring a lower turnout than in 1997, when a post-war low of 71.5 percent of voters participated. By contrast, the highest turnout since World War II in the U.S. came in 1960, when 62.8 percent of eligible voters showed up at the polls. In recent elections, turnout has hovered around 50 percent.

Abbreviating presidential campaigns could wll make them cheaper and thus help achieve some of the goals of campaign finance reform. It could also make them more entertaining, accessible, and informative by making them less boring. Shorter campaigns would provide far less disruption to the ultimate end of campaigns – governing. They might attract better candidates, too.

Why not give it a try?