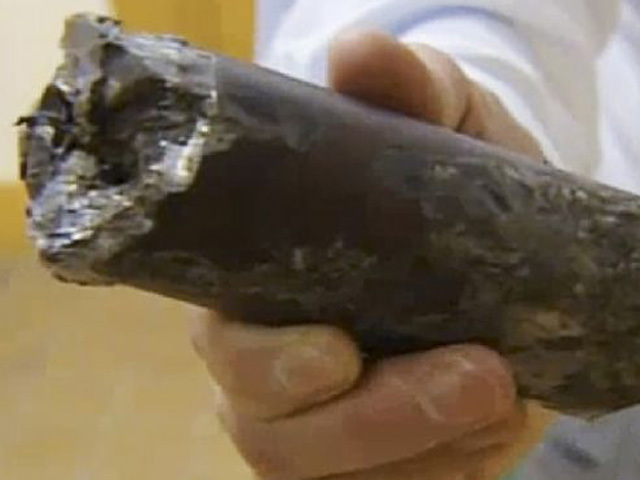 For the owners of a Plymouth, Mass., furniture warehouse, the mystery continues over the origin of a five pound chunk of metal that left a hole in its roof.

Sometime - either Wednesday or Thursday - a six-inch long, cylindrical piece of metal crashed through the roof over a storage closet at Michael's Furniture Warehouse. Luckily, no one was hurt but to date nobody has figured out where the object came from.

Federal Aviation Administration inspectors determined that the piece of metal, broken at both ends, was not an airplane part. The police were similarly stumped.

Plymouth police Capt. John Rogers told CBS Boston: "We have no idea [what it is]. At this particular point, we can only speculate what that is from. We have no clue." It would have had to arrive with some significant force or velocity to get through the warehouse roof and cause damage, he said.

Astronomer Kelly Beatty from the Clay Center Observatory in Brookline, Mass. says the likelihood is that the object did not come from outer space as nothing used in spacecraft or satellites would be made of solid metal. Instead, he suggests looking at whether there was any blasting work at a nearby construction site which might have sent the object flying into the air.

Or not. The questions continue.