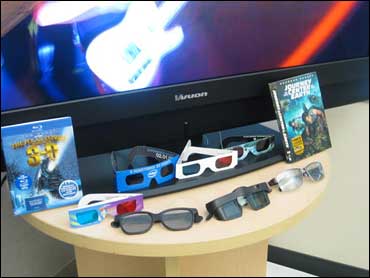 This story was written by CNET's Erica Ogg.

Everyone is raving about the "unblinkingly real" quality of watching the animated "Coraline" in 3D. That could turn to disappointment when it's time for the animated film to make its DVD and Blu-ray debut. But Dolby Labaratories, which made its name taking high-quality theater audio and compressing it for home use, thinks it has a solution.

Right now, when 3D films like "Journey to the Center of the Earth" come to disc a pair of anaglyphic paper glasses--the kind with blue/red or green/red lenses--is included with the case, which doesn't offer anything close to the experience of watching a film in 3D in the theater. It could explain why some 3D films, like "U2 3D" have yet to make it to disc at all.

As more 3D films start popping up in theaters, the quality of their appearance once you buy them on disc for home viewing is going to be an increasingly important question.

The barriers to recreating a similar theater-quality experience are both technical and practical: some content makers believe there will have to be a whole new format to make 3D films feel the same way on the couch as they do in the theater. That would involve all new equipment, which means ditching your brand new Blu-ray player and buying yet another disc format. After all the marketing messages consumers have heard about Blu-ray in the last few years, the last thing they want to hear is that Blu-ray is suddenly obsolete.

Making a movie in 3D involves projecting a different perspective for each eye. When it comes to packaging it for consumers, this is equivalent to putting the same movie on a disc twice, in terms of the amount of space it requires: too much for a single disc. Right now, when you buy a 3D movie, that's not what you get. Instead, you get what is essentially a 2D version of the film, which can look close to 3D with the paper glasses.

"You see a movie in the theater, you pick it up and take it home. The last thing you expect is to get a 3D picture at the expense of color and picture quality," said Guido Voltolina, Dolby's marketing director for image technologies.

That's where Dolby comes in. The company's engineers have developed an encoding system that compresses a 3D film onto a disc like a standard 2D film. By doing so, it can be put onto a standard disc currently available like Blu-ray and the playback will be compatible with anything that plays Blu-ray. And once the film is decoded by the video player, whether it be a standalone Blu-ray player or a PlayStation 3, the content is actually in 3D.

It's not a perfect solution. You'll still need the glasses--we're at least a decade from large displays that can show 3D without passive (polarized) or active (battery-powered shuttering) glasses. And you also still need a 3D-capable TV, more of which are just coming to the market. They are currently pricier than LCD and plasma sets, but as more begin selling from the likes of LG, Panasonic, Samsung, and Sony, the price will come down.

The next step for Dolby is actually make the technology available.

"We're proving you can do 3D in a home with current devices off the (store) shelf," said Matthew Chang, senior product manager in Dolby's consumer electronics division.

The trick will be getting studios and other content makers to sign on. And in this area, Dolby will have competition. Companies like Panasonic are working on developing a standard. The downside to that is that competing standards for 3D discs could emerge and spur another format war like the HD DVD and Blu-ray battle that concluded just over a year ago.