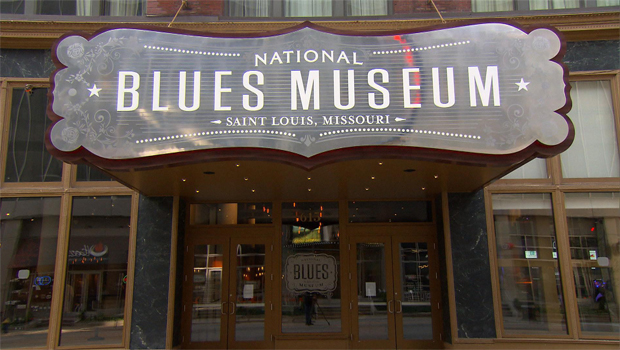 A museum opening has some folks in St. Louis singing the Blues. And as Michelle Miller explains, they couldn't be happier about it:

If every city has a soundtrack, then St. Louis, Missouri's might just be the blues.

But now the city has another reason to toot its horn: St. Louis is home to the brand-new National Blues Museum.

From the tender laments of Bessie Smith, to the swing of B.B. King, and the electricity of Muddy Waters, blues just has a way of expressing what words can't.

Rob Endcott, the chairman of the National Blues Museum, was asked to define the blues: "In a way it's easy, but in a way it's really hard.

"There's a great quote in the museum of Jimi Hendrix's: the blues is easy to play, but hard to feel."

The space traces the history of the blues and its influence on R&B, rock & roll, and funk -- all genres born from those stirring, soulful sounds.

Endicott says while the new museum is not large or artifact-intensive, "as you're going through you're learning the history in a chronological sense. We wanted to tell that entire story."

It's a story that dates back to the 1800s. Blues originated on Southern plantations -- songs about pain and adversity sung by slaves toiling in the fields. Eventually, as freed slaves migrated North, they brought that music with them.

That very migration is the centerpiece of the museum.

Miller asked, "How crucial was that migration to the evolution of blues?"

"Well, it was critical," Endicott said. "Because at every stop along the way, musicians would see who was playing there, would stay for a little while. They might make a permanent home there. And in each location they would put their individual stamp on the blues, with Memphis-style blues, St. Louis-style blues, Kansas City, Chicago and Detroit."

St. Louis Blues, for example, is more piano-based than other styles. It's also known for inspiring "The St. Louis Blues," a tune so popular it's been referred to as "the jazzman's Hamlet."

It's a history proudly displayed at the new museum, in a city eager to prove that it still knows how to sing the blues.

"There are roots here, yes. But the blues sort of belongs to the world."