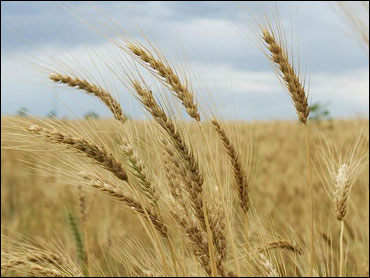 Babies born in major wheat-producing counties were twice as likely to have birth defects as those born in rural counties with low wheat production, a new federal study shows.

The research, published in the July issue of Environmental Health Perspectives, a peer-reviewed journal of the National Institutes of Health, suggests exposure to common herbicides applied to wheat could be responsible for the increased rate of birth defects.

The study was conducted by Dr. Dina Schreinemachers, a researcher with the Environmental Protection Agency in North Carolina. She examined more than 43,000 births from 1995 to 1997 in 147 rural counties in Montana, North Dakota, South Dakota and Minnesota.

She divided the counties by their rates of wheat production according to U.S. Department of Agriculture data, then compared the rates of birth defects among children born in the counties as provided by the National Center for Health Statistics.

Schreinemachers said results of her study indicate that in rural, agricultural counties with high wheat production - where the use of chlorophenoxy herbicides is higher - rates of certain birth defects "significantly increased."

Specifically, instances of circulatory-respiratory and musculoskeletal defects were twice as frequent in high-wheat counties, she said.

Even more significant, baby boys born in high-wheat counties and conceived during April or June - when herbicide application normally is in full swing - were nearly five times as likely to have birth defects than boys conceived during other times of the year and born in counties with low wheat production, the study concluded.

Death rates from birth defects among male infants in high-wheat counties also were more than twice the rates of low-wheat counties, the study found.

Schreinemachers said Thursday the disparity between male and female infants was not clear.

She said her study does not make a direct link between birth defects and use of the chemicals. It also did not determine whether the children with birth defects were born to parents who had direct contact with the herbicides. But the study strongly suggests that more research is needed, she said.

"We do not know how much of these herbicides was used in those particular counties, for instance" she said. "But we know that according to the USDA, these herbicides are used most often on spring and durum wheat."

A spokeswoman for CropLife America, the trade group for agriculture chemical makers, did not immediately return a telephone call seeking comment on the study.

The findings are similar to conclusions contained in a 1996 study by Dr. Vincent Garry of the University of Minnesota.

His study of births in Minnesota between 1989 and 1992 found a higher rate of birth defects in western Minnesota, where chlorophenoxy herbicides are applied to wheat. That study, however, also implicated certain fungicides as a possible cause.

Chlorophenoxy herbicides are widely used to control weeds in grain farming. In the four wheat-producing states included in Schreinemachers' study, more than 85 percent of the wheat acreage was treated with herbicides such as 2,4-D and 4-chloro-2-methylphenoxyacetic acid, or MCPA, the study said.

Dr. Michael Spence, Montana's state medical officer, said he was aware of Schreinemachers' study, but had not reviewed it yet. However, he said the findings were not a surprise, since the herbicides have been linked to other health problems in previous studies.

An ongoing study funded jointly by the National Cancer Institute, National Institute of Environmental Health and the EPA is tracking 90,000 herbicide applicators and their spouses to look for possible health effects of pesticides.