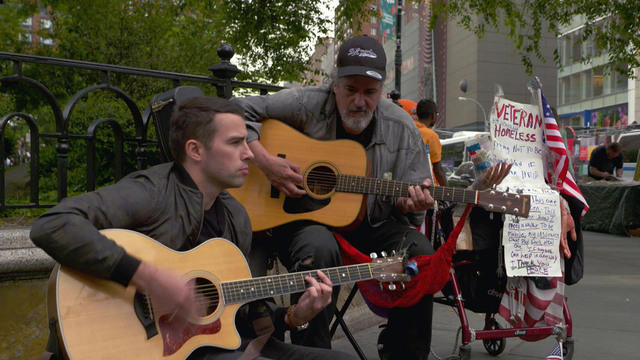 In our ongoing series, A More Perfect Union, we show how what unites us as Americans is far greater than what divides us. Today, we look at a harmonious connection through music.

The homeless population is often overlooked, but CBS News' Michelle Miller spoke with one man who's paying it forward.

A 29-year old Wall Street banker and a homeless veteran living on the streets of New York City is an unlikely duo.

"I met Chris right here on 14th street one day. He stopped by, said, 'How you doin? Can I get you anything? You need something? What can I do for you?'" John Glenn said. "It was great."

Chris Leamy – who has a budding side career as a musician – started playing with the homeless as a way to try out new songs. He'd work out the music, and they'd keep any tips.

"It started as, 'Okay, I'm going to test these ideas.' And then I would talk to these people. And I was like, 'Wow, I can really identify with them,'" Leamy said.

He could identify because Leamy was quietly battling obsessive compulsive disorder which he says nearly derailed his life, and made him feel isolated.

It's a feeling he discovered haunted the homeless as well.

Asked if he was lonely, Glenn said, "Being out here is not easy. I have people I know all my life and have known me for years, they—they cross to the other side of the street when they see me out here. That hurts my heart. And someone who doesn't know me from anywhere stop and says, 'hey, how you doin'? What can I do for you?' It means-- God, I don't wanna start cryin' 'cause I get really emotional, 'cause it -- it means a lot. It really does."

So Leamy has made it a point to get to know the homeless.

"Before doing this, I was definitely someone who just walked right by, you know. I didn't stop and talk to homeless people. I didn't give them any money," Leamy said.

"But I think what this has shown me is that a lot of these individuals just want someone to talk to. I can't tell you how many times I've heard, 'Oh, I've sat in Union Square for a month and I've talked to three people.'" Leamy said.

"I've learned so much from the homeless population. And you know, I feel very lucky," Leamy said.

Now, Leamy has made this less about him, and more about the people he meets. He started a campaign called "He Plays for Me" to raise awareness – and money – for a population that has so little. And he's included some of the homeless in music videos.

Asked if his music has gotten any better as a result, Leamy said, "I think it's opened my perspective."

"So, I have a new song coming out. It's called "Hold Ground." And the entire premise of that song is resilience. And that is something I learned from the homeless community," Leamy said.

He's met countless people with countless stories and he considers some of them true friends -- including a veteran named Hassan.

"I was sitting next to Hassan. And this woman walked up and said, 'Sir, can I buy you a cup of coffee?' And he said, 'no, thank you.' And she walked away and he turned to me. And he was like, 'did you hear that? She called me 'sir.' And he was really excited about that. So, you never know the impact," Leamy said.

Leamy's advice to everyone else, "Say hello. Just say hi. You'd be shocked at what you'd learn."

Because much of the money has come in the form of tips on the street, Leamy doesn't know exactly how much money he's raised, but he says it is more than $20,000.

How a toxic junkyard was transformed into a national park