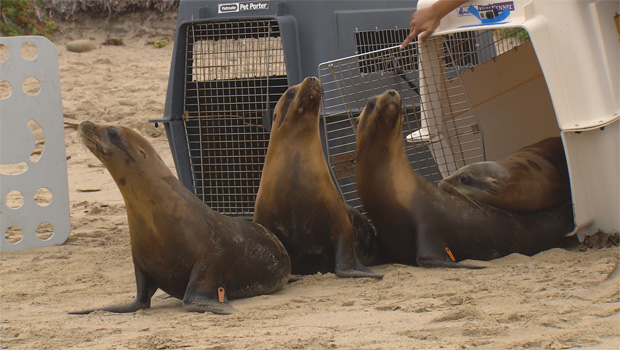 For some campers, summer by the shore involves a lot more than building sand castles. As Tracy Smith tells us, kids in Laguna Beach, California, are learning how to capture and care for sick baby sea lions who are ending up on the beach in rapidly growing numbers:

For a few seconds after they were set free last weeks, the four young sea lions paused, almost as if they were reluctant to say goodbye. Not long ago, these pups were sick, emaciated and nearly dead.

But as of last week, they were back: fat, happy, and healthy enough to scamper down to the water's edge.

Just another happy ending, courtesy of a place that makes them happen all the time.

Keith Matassa runs a rescue station at the Pacific Marine Mammal Center in Laguna Beach, California, which is often the last best hope for animals in distress.

"When they come here, they are basically on their last legs," he told Smith. "They've had a rough life. So what we have to do is bring them in, start them over again, and give them a second chance on life."

That means 'round the clock care, heated floors, and plenty of fish, even for youngsters still struggling to eat solid food.

The center is also a wildly popular summer day camp for young humans.

For one glorious week, campers ages 8 to 12 learn the finer points of marine mammal care, like cleaning animals after an oil slick, or making a "fish frappe" -- a tasty mix of herring and Karo corn syrup, pureed in a blender before it can be fed to the youngest, weakest patients.

"It was really gross and disgusting," said Kyle Schaffer. "But I've gotten used to it."

The first rule of seal camp is, you do not touch the seals.

"They're definitely not hands-on with the animals," said Kirsten Donald, the camp's education director, "because we need to keep those animals wild so they can go back into the ocean without a dependency on human beings."

Also, the animals might nip you. Turns out baby sea lions are a little like baby rattlesnakes.

"They're kind of vicious and they can bite," said Kyle.

"You like all five of your fingers?" said Smith.

So the kids, using toys, simulate feeding and cleaning and capturing stranded animals, just in case they ever have to do it for real.

And they may get their chance. In the first five months of 2005, there were fewer than 300 sea lion strandings on the shores of California.

In the first five months of this year, there were more than 3,000. And experts say we ain't seen nothing yet.

Scientists believe unusually warm water in the Pacific, brought on by a weather pattern called El Niño, is driving away the fish that sea lions usually eat, so the young pups -- who can't hunt for themselves -- are left to starve.

And Keith Matassa says next year is looking to be worse. "Because we're gonna have El Niño that's gonna be even stronger next year."

"Are you guys overtaxed at this point?"

"Our resources are being stretched," he said. "Because we can release some animals and make some more room. But we have been at capacity of 125 animals now for at least the last two to two-and-a-half months."

It hasn't always been quite this busy. The center was founded in 1971 by two Laguna Beach lifeguards and a veterinarian as a place to take the occasional stranded seal. It was popular with the local kids then, and now.

Max Berndt said, "This is one of my favorite camps that I've ever done. I just think it's fun to get messy."

Not exactly cheap, but Keith Matassa says this is one summer dream on which you can't put a price tag: "Who doesn't want to be here, looking at the animals? And there is no feeling better than watching rehabbed sea lions run down the beach into the ocean and disappear again. It's pretty amazing. I wish I could have done it when I was a kid."

For campers, the work with sea lions is mostly pretend. The thrill of watching them run back home is as real as it gets.