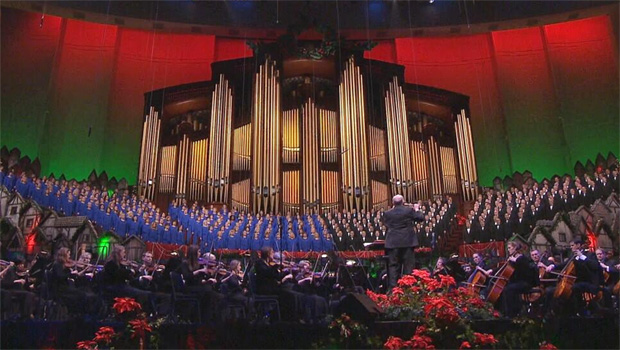 'Tis the season for heavenly sounds . . . and few earthly voices come as close to perfection as those of the Mormon Tabernacle Choir.  Lee Cowan ushers us to a front row seat:

Every year they come, by the tens of thousands, through a galaxy of twinkling lights in Salt Lake City to hear the songs of angels -- or so the Mormon Tabernacle Choir makes it seem.

The Mormon Tabernacle Choir's annual Christmas Concert in the church's 21,000-seat conference center is more like a Christmas extravaganza, this year with guest soprano Deborah Voigt.

On stage the choir is backed up by a 110-piece orchestra. Off-stage, there's make-up, wardrobe, stagehands  . . . all of it captured on 20 TV cameras to be broadcast every year.

Remarkably, almost none of them does this professionally. Nearly everyone involved with the Mormon Tabernacle Choir is a volunteer.

Alto Mindy Butler is a schoolteacher. "I feel very fulfilled in every way when I'm here," she said. "Long rehearsals, sure, but it's great, every minute of it."

"It's a big commitment," said Cowan.

"Pretty big," said Butler. "Not too big to not be worth it. It's very, very worth it, more. We get back so much more than we ever put in."

Baritone Eric Huntsman wasn't so sure about the choir job at first: "It's kind of like Lawrence Welk to me. You know, my mom watched Lawrence Welk and she watched the Tabernacle Choir. I've watched it at church meetings -- I thought it was for older people. And it wasn't 'til I got in it that I actually watched the broadcast!"

"This is not just about being the Mormon Tabernacle Choir," said Huntsman. "This is about being a choir that speaks to people, what they value, what they feel -- love, loss, all those kinds of things that music reaches."

The Mormon Tabernacle Choir has been around for 166 years, and performs regularly in its original home, the wood-domed Tabernacle, where that grand old organ can still rattle the rafters.

Richard Elliot is the principal organist for the Choir. He described the experience of sitting in front of the Choir "overwhelming."

"When you've got 375 people up there singing, it's a force to be reckoned with," he said."

But he holds his own. At this year's Christmas concert, Elliott's fleet-footed rendition of "God Rest Ye Merry Gentleman" brought the crowd to its feet.

Ever since the Mormon pioneers followed Brigham Young to Utah in 1847, music has been a part of their tradition.

"It was either a stroke of luck, or a divine providence that Brigham Young made sure that every wagon train that came West had musicians in that company," said Ronald Jarrett, the Choir President.

The Choir's weekly program, "Music and the Spoken Word," is televised every Sunday.

"We prepare and perform about 350 to 400 pieces a year," said Mack Wilberg, the Choir's 15th musical director.

And how does the Choir keep up? "Well, that's our biggest challenge," WIlberg said.

They've performed with opera stars like Bryn Terfel; pop stars like James Taylor; and our own "Sunday Morning" rock star, Charles Osgood, given the honor of reading the Christmas story in 1996.

The Choir even helped open the 2002 Winter Olympic Games in Salt Lake City.

Joining the choir isn't easy; members must be able to read music and pass intensive vocal and written tests.

"It's not like singing in church where people just say, 'Oh, you put on a good program,'" laughed Butler.

And there's a mandatory retirement: 20 years with the choir, or 60 years of age, whichever comes first.

"It is difficult for some people to leave the Choir because it is such an amazing experience," she told Cowan. "But it has been such a blessing in my life that I am just grateful at this point."

Her smiling face has been a fan favorite -- a responsibility, she says, that at times moved her to tears.

"I had a sweet lady write to me last week and say that when she watches the Choir and sees me sing, she is able to get through the next week, whatever it brings," Voorhees told Cowan. "And that's amazing."

The Choir often performs to console and soothe. On the night of September 11, 2001, a previously-planned concert was changed to become a memorial instead.

"I'll never forget singing 'God Bless America' for one of the final pieces of the evening," said musical director Mack Wilberg. "And it took on a new and significant meaning that evening."

"Some see the choir as just a Mormon choir, but it's really not," said Choir President Jarrett. "Our music is for everyone."

"Is that a conscious choice, not to proselytize?" asked Cowan.

"Oh yes," he replied. "We are not proselytizing through our music at all. We just share beautiful music."

Whether it's the sacred or the seasonal, the Mormon Tabernacle Choir has strived for -- and found -- a singular purpose: to make a truly joyful noise indeed.