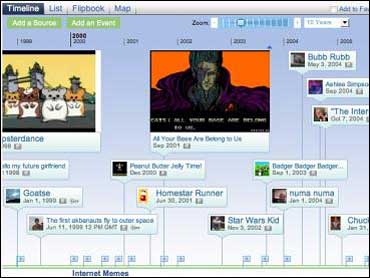 Timeline creator Dipity has finally been put to a completely awesome use: a user called "tatercakes" has created a timeline of fads and memes that have surfaced on the Internet since its earliest days. And, as far as I can see, almost nothing has been left out -- if you're a Dipity member, you can add to the list.

Among the chronological listings are some memes that pre-date my knowledge of the Internet ("Trojan Room coffee pot"); a few classics like All Your Base, Hampsterdance, and Peanut Butter Jelly Time; and more recent ones like lolcats and Rickrolling. Don't know what those are? Check out the timeline.

There are also a few culturally significant moments that go beyond the Web, like Stephen Colbert's White House Press Correspondents Dinner speech in 2006. The pirated C-SPAN clip of that speech taught the media industry that it's tough to put a lockdown on video that everybody wants to see, taught the White House that you should really be familiar with a comedian's schtick before booking him for a speaking engagement, and taught millions of erstwhile American Luddites about the possibilities of YouTube.

Aside from that, the list does not yet include many of the people who have arguably turned into Internet memes themselves: digitally beloved politicians like Howard Dean in 2004 and Ron Paul earlier this year, a smattering of YouTube stars, and over-the-top bloggers like Perez Hilton.

But Sen. Ted Stevens' parodied, mocked, and dance-remixed "Series of Tubes" speech was the only really glaring omission I saw, aside from a few memes that are entirely too disgusting to mention in a family-friendly context (though be warned, a few gross-outs like "Goatse" are already on the list).