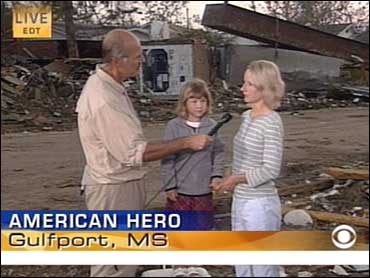 After a national disaster like Hurricane Katrina, there are many stories that never appear in the paper or on TV of people who perform acts of true heroism. That's especially true in Gulfport, Miss.

For The Early Show's American Hero series, co-anchor Harry Smith asked the pastor of a First Baptist Church, who among those in his congregation stood out in helping the community — and Pam Blaylock was the name.

Along with her daughters, Madison and Abby, who is only 2, she reached out to help others.

"When we got out and saw how bad the devastation was, there wasn't any water or ice," Blaylock said. "And, like us, people had not prepared because we didn't think that it would be this bad. So we started taking food and water and ice to people out in the rural areas that could not get to town to the distribution points."

For Blaylock it was important for her daughters to learn to be charitable.

"I think it's important for them to learn to help other people, and to not be selfish, and to realize that we're not the only people in the world," she said. "That's what we're supposed to do — help people."

As they were driving by a home in the neighborhood, they realized what they could do to help.

"There was a sign they had made out of plywood and said: 'We have six babies staying here, need supplies, help, please,' " Blaylock said. "And we took formula, diapers, everything you would need for a baby, and then food for the adults. There were two moms and six babies under 3 staying in one house."

Madison added: "We went back, but we couldn't see the sign because the sign fell down. But we just knew that was the house, so we went."

In another instance they saw a man drinking water out of a ditch.

"He had a bucket and he was getting water," Blaylock said. "We stopped and asked him if he needed any water. He said, 'If you have some that I could buy or that you would give me that would be great.' So we gave him food and water also."

As they experience the devastation left by the hurricane, Blaylock said the community has changed.

"I don't think the focus is material things anymore," she said. "People are focusing more on church and family, and they don't hold the material possessions so dear anymore."