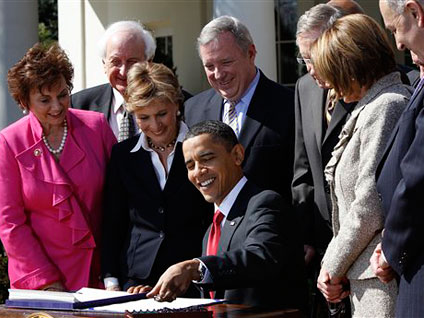 The Sept. 11 commission's final report - set for release Thursday morning - concludes the hijackers exploited "deep institutional failings within our government" over a long period. That's according to Bush administration officials who note that the report does not personally blame either President Bush or President Clinton for security mistakes.

On the eve of the report's scheduled release, chilling surveillance video from Washington Dulles International Airport the morning of Sept. 11, 2001, was obtained by The Associated Press and made public for the first time. The video shows four of the five hijackers being pulled aside to undergo additional scrutiny after setting off metal detectors - and then being allowed to board the fateful flight that was intentionally crashed into the Pentagon.

CBS News and CBSNews.com will offer live coverage of a Sept. 11 panel press conference on the report Thursday at 11:30a.m.

The video shows an airport screener hand-checking the baggage of one hijacker, Nawaf al-Hazmi, for traces of explosives before letting him continue onto American Airlines Flight 77 with his brother, Salem, a fellow hijacker.

The commission's report, being released Thursday, describes the patience and determination of the hijackers and said they explored weaknesses in airline and border procedures, even taking test flights to see when cockpit doors were open.

White House officials and congressional leaders were briefed on the report's findings, and Bush is to receive a copy of the 575-page report on Thursday.

Administration officials familiar with the report told CBS News the administration does not agree with every detail or every fact, but it does agree with its major findings – that Presidents Bush and Clinton took al Qaeda seriously and took action.

"It does not place blame on particular individuals or particular incidents, but in fact it identifies institutional failings that have grown up over time about the way our government is organized," one official said.

It concludes that Bush and Clinton took the threat of al Qaeda seriously and were "genuinely concerned about the danger posed by al Qaeda," the official said. It finds that neither president was to blame for failing to stop the attacks, which were the culmination of years of planning.

While Bush again said he's grateful for the commission's work, he seemed less enthusiastic about its recommendations, reports

"I look forward to receiving the report. I will continue to work with the Congress and state and local governments to build on the homeland security improvements we already have made," the president said Wednesday.

Stewart reports the president's reticence may have to do with the fact that the commission would re-do some of what he's already done in counterterrorism.

As expected, the report will call for creating a Cabinet-level national director of intelligence with authority over the CIA, FBI and other agencies. The White House administration is reserving judgment on that recommendation, and officials doubt it could be approved by Congress this year.

An earlier report by the commission describing activities at Dulles is consistent with the men's procession through airport security as shown on the grainy surveillance video.

No knives or other sharp objects are visible on the surveillance video. But investigators on the commission have said the hijackers at Dulles were believed to be carrying utility knives either personally or in their luggage, which at the time could legally be carried aboard planes.

The video shows hijackers Khalid al-Mihdhar and Majed Moqed, each dressed conservatively in slacks and collared shirts, setting off metal-detectors as they pass through security. Moqed set off a second alarm, and a screener manually checked him with a handheld metal detector.

The pair were known to travel together previously and had paid cash to purchase their tickets aboard Flight 77 on Sept. 5, 2001, at the American Airlines counter at Baltimore's airport.

Al-Mihdhar and Nawaf al-Hazmi had been known to be associated with al Qaeda since early 1999 by the National Security Agency, and were put on a terrorism watch list on Aug. 24, 2001.

Only Hani Hanjour, believed to have been the hijacker who piloted Flight 77, did not set off a metal detector as he passed through Dulles security that morning, according to the video.

Moments after Hanjour passed alone through the security checkpoint, wearing dark slacks and a short-sleeved shirt, the final two hijackers, the al-Hazmi brothers, walked through the checkpoint.

Nawaf al-Hazmi, described by investigators as the right-hand accomplice of hijacker-planner Mohammed Atta, set off two metal-detectors, and a screener manually checked him with a handheld device.

Nawaf and his brother, each wearing slacks and Oxford shirts, were directed to a nearby counter, where they appeared to examine their tickets while another screener checked Nawaf's carryon bag with an explosive trace detector. Each was cleared to board Flight 77.

The AP obtained the video from the Motley Rice law firm, which is representing some survivors' families who are suing the airlines and security industry over their actions in the Sept. 11 attacks.

"Even after setting off these alarms, the airlines and security screeners failed to examine the hijackings' baggage, as required by federal regulations and industry mandated standards, or discover the weapons they would use in their attack," lawyer Ron Motley said.

Less than four months before the presidential election, the commission's work already has ignited partisan debate over whether Bush took sufficient steps to deal with terrorism in the first year of his administration.

Four administration officials briefed reporters on the content of the report on condition of anonymity because it has not been publicly released.

"Rather than finding that there was a failure at the presidential level, what they find though is that there are failings and that there were deep institutional failings within our government," an official said. "And that's what they really examine at some length over a long period of time — that there were a variety of factors spanning many years and many administrations that contributed to a failure to share information amongst agencies for both legal and policy reasons."

In particular, the official said, the commission found the FBI was not set up to collect intelligence domestically, in part because of civil liberties concerns.