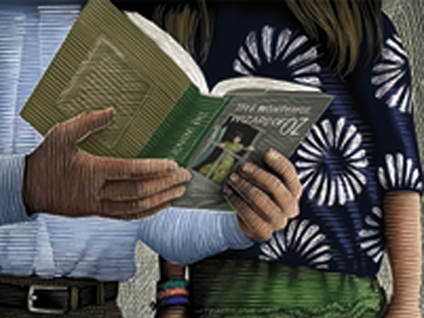 Thanks to a retired librarian in Millville, New Jersey, I may have found the secret to successful parenting - not in any one, single book, but in this one, single dad, whose wife left him when his daughter was 10.

"It was just she and I," said Jim Brozina. He says he and his daughter Alice were always close - but around 4th grade, he started worrying they'd soon drift apart.

"After 4th grade, they start looking for their friends," he said. "Could be that we just didn't see each other during the day or talk to one another - it could have been."

"The Streak" was a challenge Jim issued to his daughter that 4th grade year - to see how many nights in a row they could read together.

He even made rules - that they had to read at least one chapter, and had to finish before midnight.

"It was our way of being connected," Brozina said. "If I got that done, and nothing else, that was the important thing of the day had gotten done."

"You would think 15 minutes a day wouldn't be that fundamental," she said, "but it turned out it was what everything came back to."

Starting with chapter books and building to Shakespeare, Jim continued reading to Alice well after most parents give up on story time ... well into high school.

That's right: While the other kids were leaving parties to get beer ("I don't know if I was particular popular," Alice mused), Alice was leaving for "King Lear."

"And I didn't even drive, either, so I would have to burden someone at a party to take me home to get read to, and then drive me back.

And yet, she and her dad kept it up every night 'till the first day of college.

After unpacking her things at Rutgers, Jim and Alice sat in the stairwell of her dorm and shared one last read.

"It was a hard thing to bear - to know that after almost nine years that we were now doing the last time," said Jim.

"He put in every night for years; he didn't have to do that," said Alice. "He's selfless."

Alice ended up graduating top of her class, with a degree in - you guessed it - English Literature.

And thanks to all that reading her dad did, Alice is now able to read to him - from her own book. It's called "The Reading Promise."

As for Jim - although he rarely reads to Alice anymore, he still finds a regular audience, by traveling around to local senior centers.

Apparently you're never too old to be read to.